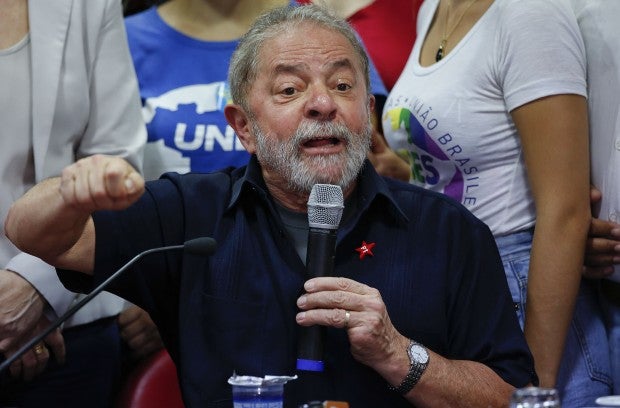 Brazil’s former President Luiz Inacio Lula da Silva speaks during a press conference at the Workers Party headquarters in Sao Paulo, Brazil, on March 4. Brazilian police acting on a warrant questioned the former president and searched his home and other properties, in the most recent development yet in the sprawling corruption case at the oil giant Petrobras. AP

SAO PAULO—Brazilian police questioned former President Luiz Inacio Lula da Silva for about four hours in an investigation into a sprawling corruption case involving state-run oil company Petrobras that has ensnared some of the country’s top lawmakers and wealthiest businessmen.

The once-immensely popular president, who governed from 2003 to 2010, angrily denounced the Friday morning raid on his home by police to detain him as part of a campaign to sully his image, that of his party and that of his hand-picked successor, President Dilma Rousseff.

“I felt like a prisoner this morning,” said Silva, who has expressed interest in possibly running for president again. At a rally late Friday in Sao Paulo, an emotional Silva insisted on his innocence and blasted those accusing him. “If they are a cent more honest than I, then I will leave politics,” he pledged, his eyes welling with tears.

Rousseff also expressed her “total inconformity” with the operation, which she called unnecessary, although she appeared to distance herself from her one-time mentor by only briefly mentioning Silva in an address Friday afternoon.

Police arrived at about 6 a.m. at Silva’s residence in greater Sao Paulo’s Sao Bernardo do Campo and spirited the 70-year-old to a federal police station at the city’s Congonhas airport. Silva was released after around four hours of questioning.

Police said they also searched the headquarters of his nonprofit foundation Instituto Lula, as well as properties connected to his sons and other family members. One of his sons was brought in for questioning.

Clashes broke out between Silva’s supporters and critics outside several sites where police were conducting searches. After his release, cheering supporters gathered outside Silva’s apartment to welcome him home.

Judge Sergio Moro, who is heading the Petrobras investigation, said he allowed the police to haul in Silva for security reasons, citing fears that demonstrations could complicate efforts to question him. He also stipulated that police were not to handcuff or film the former leader.

Officials said they were looking into 30 million Brazilian reais ($8.12 million) in payments for speeches and donations to the Instituto Lula by construction firms that were crucial players in the Petrobras corruption scheme. They were also looking into whether renovations and other work at a country house and beachfront apartment used by Silva and his family constituted favors in exchange for political benefit.

“No one is exempt from investigation in this country,” said public prosecutor Carlos Fernando dos Santos Lima. “Anyone in Brazil is subject to be investigated when there are indications of a crime.”

Prosecutors in the so-called Car Wash corruption case say more than $2 billion was paid in bribes to obtain Petrobras contracts, with some money making its way to several political parties, including the governing Workers’ Party. Some of Brazil’s wealthiest people, including the heads of top construction companies, have been caught up in the probe, as have dozens of politicians from both the governing coalition and the opposition.

The reaction of the governing party was scathing. Workers’ Party president Rui Falcao issued a video statement calling the detention “a political spectacle” that revealed the “true character” of the probe.

“It’s not about combatting corruption but simply to hit the Workers’ Party, President Lula and the government of President Dilma,” Falcao said.

Legal analysts said that bringing Silva in for questioning suggests that any possible case against him is still in its early phases.

“Police are still collecting evidence. There is no smoking gun because if there were, the searches wouldn’t be needed,” said Jair Jaloreto, a Sao Paulo-based expert on money laundering.

A lathe operator at a metal factory who entered politics as a labor union leader, Silva was widely seen as representing the common man, and his ascension to the country’s highest office was hailed in a nation long dominated by the elite. During his two terms in office Silva presided over galloping economic growth that pulled tens of millions of poor Brazilians into the ranks of the middle class.

Despite a votes-for-bribes scandal that took down his chief-of-staff and others, Silva left office with record high popularity levels and his hand-picked successor, Rousseff, handily won the presidency.

Silva and Rousseff have seen their popularity nosedive as Brazil has slipped into its worst recession in decades and the Car Wash investigation spread. Rousseff’s approval ratings have dipped into single digits, though they’ve rebounded slightly of late. She faces impeachment proceedings.