Duterte, Cayetano: Aquino failed to give ‘bold solutions’ vs terrorism 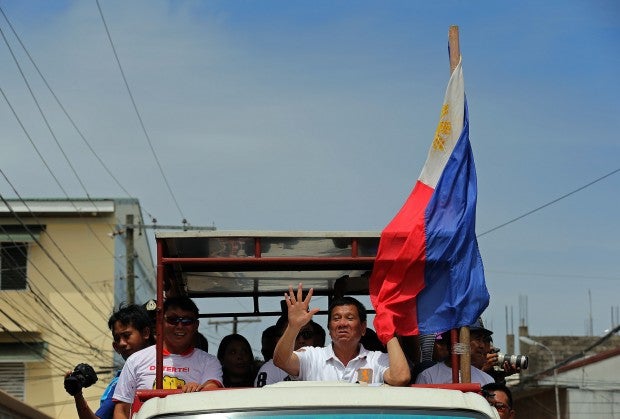 The tandem of Davao City Mayor Rodrigo Duterte and Sen. Alan Peter Cayetano slammed the Aquino administration for its failure to provide “bold solutions” to address terrorism in the Philippines.

Duterte and Cayetano vowed to end disorder in Mindanao, saying terrorism is caused by “government neglect.”

“People long for real change but government continues to neglect their woes. That’s why there’s so much disorder,” Duterte said in a statement on Friday.

The tandem cited the failed assassination attempt last Tuesday night against a prominent Saudi cleric, who is on the hit list of the Islamic State and another Saudi diplomat in Western Mindanao State University, Zamboanga.

The duo hit the government “for failing to keep the cleric under close security watch, given his inclusion in the hit list.”

The tandem also cited the recent incident where a group reportedly inspired by the Islamic State (ISIS) launched an assault on a remote Army outpost in Butig, Lanao del Sur province.

The attack triggered a week of fighting, which left six soldiers and at least 12 militants dead, and forced more than 30,000 people to flee their homes.

Duterte and Cayetano said these incidents were caused by the government’s failure to provide bold solutions to the Filipinos’ daily woes.

To address the problem, the duo would add 3,000 security force in the armed forces and train them either as scout rangers or special forces to combat lawless elements.

(Criminals are bold. Hence, this calls for bold solutions. Indecisiveness is not welcome. This problem is not for the faint-hearted.)

“If there’s enough opportunity provided by government for our people in the regions, there is no need to take up arms or be seduced by terrorism,” he said. “We need leaders with political will who can effect bold and swift solutions. This is what we are bringing in this election,” the tandem said.

In previous speaking engagements, Duterte has vowed to push for federalism as an alternative to the Bangsamoro Basic Law (BBL), which failed to pass under the Aquino administration.

“Nothing short can bring peace in Mindanao,” he said, during the February 21 presidential debates in Cagayan de Oro City. CDG