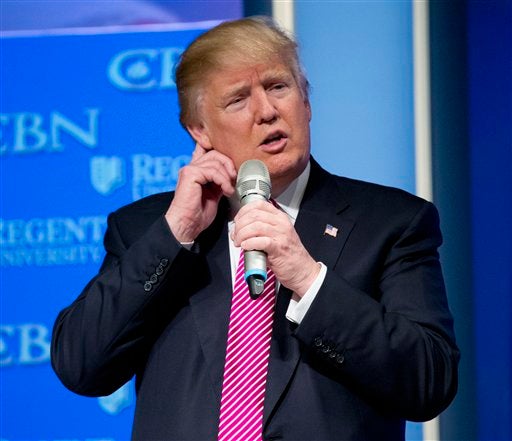 WASHINGTON, United States – Donald Trump abruptly backtracked Friday on vows to torture terror suspects and kill their families, saying he would not order the US military to break international laws if elected president.

In a statement to the Wall Street Journal, the Republican White House frontrunner said he would “use every legal power that I have to stop these terrorist enemies.”

“I do, however, understand that the United States is bound by laws and treaties and I will not order our military or other officials to violate those laws and will seek their advice on such matters. I will not order a military officer to disobey the law.”

Trump’s new position stands in contrast to remarks he made at a Republican debate less than 24 hours earlier, when he doubled down on previous pledges that, if elected, he would do “a hell of a lot worse” than waterboarding and said he had “no problem” with the targeting of terror suspects’ families.

“Can you imagine these people, these animals over in the Middle East, that chop off heads, sitting around talking and seeing that we’re having a hard problem with waterboarding?” he said at the debate, echoing several similar statements he had made in recent months.

His tough talk resonated with supporters, tapping into frustrations over the pace and rules of engagement of the US-led campaign against the Islamic State group and other jihadists.

But the rhetoric drew broad condemnation from elsewhere, with observers saying the Pentagon would probably refuse any illegal orders.

“Those specific orders are illegal and you will not find lawyers to present a compelling case that will go the other way,” Peter Feaver, a professor of political science and public policy at Duke University, told AFP.

“His embrace of the expansive use of torture is inexcusable,” the letter stated.

“You are required not to follow an unlawful order, that would be in violation of all the international laws of armed conflict,” he said in a televised interview.

“Would you view these orders as lawful? In addition, what advice would you provide to service members if such orders were issued?” Graham wrote.

Trump’s rivals challenged him during Thursday’s debate over his changing political positions on several issues, and his latest U-turn will only fuel that criticism. The candidate responded during the debate by saying he was “flexible.”

Several other establishment figures have challenged Trump in recent weeks, including John Rizzo — a top CIA lawyer when the agency was waterboarding detainees — who said officials would rather quit than revisit the legal and political minefield associated with the technique.

Congress has now banned the use of waterboarding and other harsh interrogation tactics.

“Many of those who were connected to the (enhanced interrogation) program over its six years’ span — and hundreds are still there — would‎ resign or retire rather than have to go down that perilous road again,” Rizzo told Newsweek.

READ: Foes step up attacks on Trump at US debate

Trump’s proposal to kill the families of terror suspects was even more contentious.

“The unlawful killing of a human being is murder unless it is justified, and there is no justification for a murder in violation of the law of armed conflict.”

NATO’s top commander General Philip Breedlove said this week that his colleagues in Europe — where the United States has been key to maintaining security since World War II — have started wondering aloud how the US military might change under a Trump presidency.

“I get a lot of questions from our European counterparts on our election process this time in general,” Breedlove said.

“They see a very different sort of public discussion than they have in the past.”

Read Next
Couple dead in Quezon road accident
EDITORS' PICK
Look Through: The fate of impounded stray dogs
House energy committee chair Arroyo bats for cheap electricity
What to watch out for when selecting a video surveillance solution
23,000 cops to be deployed nationwide for school reopening
Unleash the photographer in you this World Photography Day with vivo smartphones
DOH says COVID-19 cases plateauing, but public shouldn’t be ‘complacent’
MOST READ
Korina Sanchez reunites with former ABS-CBN co-anchors Julius Babao, Cheryl Cosim
Sharon Cuneta asks for prayers for friend in ICU who suffered silent stroke
QC school’s shutdown violated rules – CHEd
Light therapy could be the answer to your sleep problems
Don't miss out on the latest news and information.