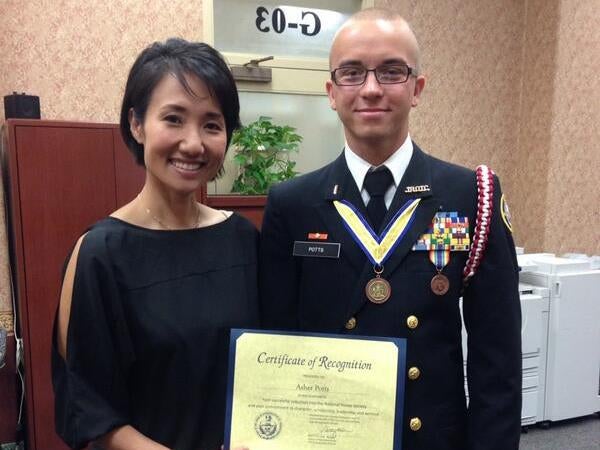 HARRISBURG, Pa.—Honor student Asher Potts was well into his senior year in high school when police got a tip that the earnest teenager who had so impressed community leaders for nearly four years was not the person he claimed to be.

Investigators soon concluded Potts was actually a 23-year-old Ukrainian named Artur Samarin, who had overstayed his visa, and they said in charging documents that he confessed to having sex with an underage teen girl.

His arrest last week—charged first with identity theft, then with statutory sexual assault and corruption of minors—drew astonished responses from people who knew the boyish-looking Samarin through his participation in a school military program, his academic excellence and his acceptance to a prestigious flight school.

“My understanding is his motives were pure coming over here, and given his time at John Harris (High School), no one had a complaint about him,” said his lawyer, Adam Klein. “Until that’s proven differently, that’s my feeling at this point—that he came here to do what many immigrants do, to take part in the American dream.”

Prosecutors said that they are working with federal investigators to piece together the facts about Samarin and that more charges are possible. But it’s clear he made an impression in Harrisburg.

The city’s mayor at the time pronounced Oct. 27, 2013, as Asher Potts Day to recognize his accomplishments; he was a student representative to the school board; and he was third runner-up for a spot on the homecoming court, Pennlive.com reported.

One aspect of the case that has drawn the attention of investigators is the role played by Michael and Stephayne Potts, with whom he lived for much of the past four years before moving in months ago with another family.

Samarin told Harrisburg station WHTM-TV last week in a call from jail that his family pooled money to send him to the US “for a better life.” After his visa expired, he said, the Pottses helped him obtain a birth certificate and a fake Social Security card in the name of Asher Potts.

He accused the couple of using his illegal immigration status as leverage to pressure him into doing work for them.

“Everything they ask of me, I could not tell them no,” he told the station.

Court records say the couple “conspired with” Samarin in faking his way through high school, but they have not been charged.

Their lawyer, Corky Goldstein, said Thursday it was the Pottses who first alerted authorities about Samarin by contacting the FBI months ago. Goldstein would not say what motivated the couple to contact authorities, but said that they thought he was younger than he is and that they did not know he was having sex with the girl. They deny his claim he was pressured to work for them.

“She thought she was helping a young man who was being persecuted in his country, the Ukraine, by the Russians,” Goldstein said. “They opened up their home to him.”

Samarin had left the Pottses and was living in a shelter several months ago when Waleed McClintock and his family let him move in with them in nearby Middletown.

McClintock said he was troubled by what he and his wife saw of the Pottses’ relationship with Samarin and equally impressed by the young man’s drive.

Samarin, who shared a bedroom with McClintock’s 17-year-old son, would rise before 5 a.m. to get a bus to school. He took college-level classes at night and also worked at a grocery store.

“This is the worst that Ukraine has to offer? OK, you can ship another busload over here,” McClintock said Thursday. “He was a very impressive young man. He was respectful and intelligent and seemed to have a plan for his life.”

He said Samarin was slight of build, disappearing beneath a hand-me-down coat. He told McClintock little about his past or his family.

“We never pried,” he said. “We simply wanted to offer a safe space to be in.”

In the TV interview, before he was charged with sexual assault, Samarin appeared to admit the identity theft allegations.

“What can I say? I did abuse the system. Yes I did,” Samarin told WHTM. “I did use this identity, and it’s the law.”

Police said that by the time Samarin’s tourist visa expired in March 2013, he already nearly finished his freshman year at John Harris, better known as Harrisburg High School, despite having attended two years of college in Ukraine.

“By all accounts he was an excellent student,” Dauphin County District Attorney Ed Marsico said. “He was involved in the community, he was in the ROTC program, he did community service.”

Samarin’s mother, Victoria Samarina, emailed WHTM from Ukraine this week after finding news accounts about him that confirmed her fears he might be in trouble. She said she was sure he could not have done anything wrong.

“I know that he just wanted to get a good education, I could not help to get him here,” she wrote. “Please convey to him that I love him very much; he’s my dearest person in the world.”