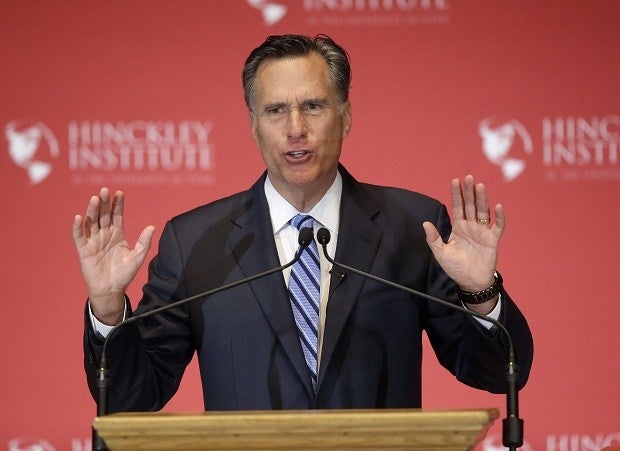 WASHINGTON — The Republican’s most recent presidential nominees, Mitt Romney and John McCain, lambasted current front-runner Donald Trump on Thursday, calling him unfit for office and a danger for the nation, in an extraordinary show of intra-party chaos.

“His is not the temperament of a stable, thoughtful leader,” Romney declared. He called Trump “a phony” who is “playing the American public for suckers,” a man whose “imagination must not be married to real power.”

Hours later, Trump lashed back, calling Romney “a choke artist” who lost to Barack Obama four years ago only because he was such a poor candidate.

The vicious feud marked a near-unprecedented scenario pitting the Republican Party’s most prominent leaders, past and present, against each other as Democrats begin to unite around Hillary Clinton.

Underlying the clash is a bleak reality for panicking Republican officials: Beyond harsh words, there is little they see to stop Trump’s march toward the presidential nomination. Party leaders are poring over complicated delegate math, outlining hazy scenarios for a contested national convention and even flirting with the idea of a third-party effort.

Romney confidant Ron Kaufman, a senior member of the Republican National Committee, openly embraced the possibility of a contested convention: “If that’s the only way to stop Trump, it makes sense,” he told The Associated Press.

In the most notable verbal attacks against Trump to date, Romney and his 2012 running mate, House Speaker Paul Ryan, urged voters in the strongest terms to shun the former reality television star.

It is virtually unheard of for a former party standard-bearer to attack a fellow party member and candidate for the presidential nomination. But it has been a political season like none before.

The Republican race, already dominated by insults and name-calling, has seen Trump’s once-unlikely candidacy morph into an increasingly strong bid for his party’s nomination for the November election.

“The only serious policy proposals that deal with the broad range of national challenges we confront today come from Ted Cruz, Marco Rubio, and John Kasich,” Romney said of Trump’s rivals. “One of these men should be our nominee.”

Earlier in the day, Trump dismissed Romney as “a stiff” who “didn’t know what he was doing” as the party’s candidate in 2012. “People are energized by what I’m saying” and turning out in remarkable numbers to vote, Trump told NBC.

Trump is coming under increasing pressure from his party as he fights for the majority of delegates needed to win the nomination.

Romney said a Trump nomination at the party’s convention in July would enable Clinton to win the presidency.

Romney also criticized Clinton, accusing her and her husband, former President Bill Clinton, of personally profiting from their positions of power.

Panicked Republican leaders say they still have options for preventing Trump from winning the nomination, just not many good ones. They include a contested convention and even the long-shot prospect of a third party option.

Also Thursday, dozens of conservative national security experts warned that Trump is unfit to be commander in chief.

Former Homeland Security Secretary Michael Chertoff and more than 70 others called Trump’s “embrace of the expansive use of torture” inexcusable. They also object to what they say is Trump’s “hateful, anti-Muslim rhetoric” and his advocacy for waging trade wars.

Despite Trump’s strong showing on Tuesday, he was not yet on track to claim the nomination before the party’s national gathering, according to an Associated Press delegate count. He has won 46 percent of the delegates awarded so far, and he would have to increase that to 51 percent in the remaining primaries.

Party strategists cast March 15 as the last opportunity to stop Trump through the normal path of winning states and collecting delegates. A win for Rubio in his home state of Florida would raise questions about Trump’s strength, as could a win for Kasich, Ohio’s governor, on his home turf.

Retired neurosurgeon Ben Carson all but ended his bid Wednesday, saying he would skip the debate and declaring he did “not see a political path forward.”

On the Democratic side, Clinton was drawing broad support from voters and her party’s leaders. Rival Bernie Sanders vowed to keep up the fight, though his path to the nomination has narrowed. So far, Clinton has at least 1,005 delegates, Sanders 373. It takes 2,383 Democratic delegates to win.