World considers a Trump presidency, and many shudder 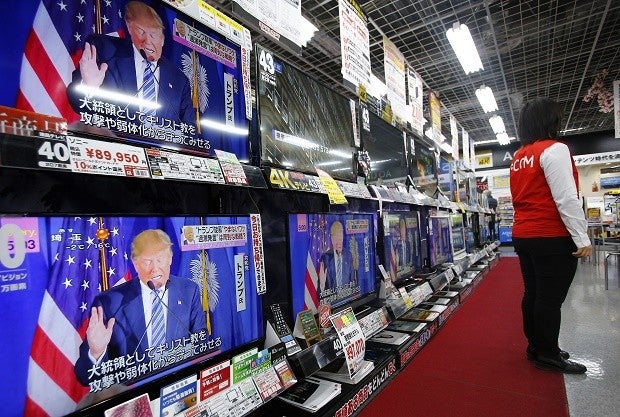 A salesclerk stands in front of flat-panel TVs showing Republican’s front-runner candidate Donald Trump in a news program on the US presidential election’s Super Tuesday at an electronics store in Tokyo, Wednesday, March 2, 2016. After the Super Tuesday primaries and caucuses in a dozen states, Trump and Democrat candidate Hillary Clinton had tightened their grasp on their party’s presidential nominations. AP

“The Trump candidacy has opened the door to madness: for the unthinkable to happen, a bad joke to become reality,” German business daily Handelsblatt wrote in a commentary for its Thursday edition. “What looked grotesque must now be discussed seriously.”

There was also glee from some Russian commentators at how American politics is being turned topsy-turvy in 2016. And in Latin America, Ecuador’s president predicted a Trump win could boomerang and become a blessing to the continent’s left.

However, the dominant reaction overseas to the effective collapse of the Republican Party establishment in the face of the Trump Train appeared to be jaw-dropping astonishment, mixed with dread at what may lie ahead.

“To consider Donald Trump a political clown would be a severe misconception,” said another European daily, Salzburger Nachrichten. If Trump is elected to the White House, the Austrian paper predicted, his ideas “would bring major dangers for the USA and the world … basically a nationalist-chauvinist policy that would make America not great but ugly, and risk the stability of the international order.”

Eytan Gilboa, an expert on US-Israeli relations at Israel’s Bar-Ilan University, said the best word to describe Israeli feelings about Trump is “confusion.”

There are certain parts of him that Israelis can relate to, such as his aversion to political correctness, his tough stance on Islamic terrorism and his call for a wall with Mexico to provide security, Gilboa said.

But others have been particularly jarring to Israelis, such as comments about Jews that many consider insensitive and his derision of US Sen. John McCain’s captivity in Vietnam.

“This is something that every Israeli would reject. It’s a highly sensitive issue in a country where prisoners of war are heroes and people go out of their way to release them,” he said.

Trump has drawn concern in China, but not a huge amount of attention despite Trump repeatedly invoking the Asian giant during his campaign to cite US weakness that he would turn around, accusing Beijing of manipulating its currency, stealing American jobs and unfair competition.

Chinese may not be taking his comments too seriously because they believe he won’t be elected or that he’d modulate his positions once elected, said Xiong Zhiyong, international relations expert at China Foreign Affairs University.

“If, hypothetically, Trump became the US president and he held on to his stance and proposals made during the election, China-US relations would be in big trouble in many aspects such as security and economics,” he said. “In that case, the US foreign relations policies will undergo a huge change.”

Thuraya Ebrahim al Arrayed, a member of Saudi Arabia’s top advisory body, the Shura Council, said a Trump presidency would be “catastrophic” and set the world back “not just generations, but centuries.”

“We pray to God that a racist, politically incorrect personality does not win the election,” she said. “How can he tell Muslim students going there to study he will shut the door in Muslim faces?”

Writing in the Financial Times of London, Martin Wolf summed up the mood of a good share of Europe’s business and economic elite, arguing that it would be a “global disaster” if Trump, who won seven states in Tuesday’s Republican contests, made it all the way to the Oval Office.

“Mr. Trump is a promoter of paranoid fantasies, a xenophobe and an ignoramus. His business consists of the erection of ugly monuments to his own vanity. He has no experience of political office. Some compare him to Latin American populists. He might also be considered an American Silvio Berlusconi, albeit without the charm or business acumen,” Wolf wrote.

He also said Berlusconi, a former Italian prime minister and media tycoon, “unlike Mr. Trump never threatened to round up and expel millions of people.”

A Japanese online commentator used much the same language, and likened the Republican front-runner to the evil nemesis of wizard Harry Potter.

Trump’s unexpected political rise reflects “elitism and opposition to globalization, but at its heart is a xenophobia and populism that comes from ignorance,” said Masato Kimura, former London bureau chief for the conservative newspaper Sankei Shimbun. “Although this is another country’s election, Japan’s allies should raise their voices to help prevent the birth of a ‘Voldemort’ president in the United States.”

In the Mexican newspaper Reforma, columnist Sergio Aguayo compared anti-Mexican sentiments unleashed by Trump to the anti-communist Red Scares of the 20th century, and accused Trump of igniting a “brown panic.”

“We must answer again and again Donald Trump, and make the US government understand that we’re not willing to continue being pointed out as the only ones responsible for problems that are also caused by the United States,” Aguayo wrote.

La Jornada, a leftist Mexican paper, ran a caricature of Trump wearing a “KKK” necktie and declaring, “I will make cremation ovens for the Mexicans and Muslims … and they will pay for their construction!”

In the moderate and predominantly Muslim West African nation of Senegal, Mame Ngor Ngom, editor-in-chief of La Tribune, a weekly newspaper, expressed hope that in the final analysis, Americans will not be “so thoughtless” as to hand Trump their country’s highest office.

“We think that the Americans won’t vote for him. They already paid the consequences with George W. Bush. … Donald Trump will fail,” the Senegalese journalist predicted.

In Russia, some took delight in how messy US politics have become.

The popularity of Trump and Democratic presidential hopeful Sen. Bernie Sanders, who took four states on Tuesday compared to the seven won by Hillary Clinton, “bears witness to the crisis of trust in such traditional clans” as the Bushes and the Clintons, wrote Konstantin Kosachev, chairman of the foreign affairs committee in Russia’s upper house of parliament, in a post on Facebook.

According to Alexander Dugin, a Russian nationalist ideologue with close ties to the Kremlin, Trump “is sometimes disgusting and violent, but he is what he is. It is true America.”

In Europe, where some also feel their nations are being submerged by waves of foreign migrants and violent Islamic radicalism is a real danger, not all have condemned Trump. Jean-Marie Le Pen, founder of France’s far-right National Front, has said that if he were an American, he would cast his ballot for Trump. On Wednesday, Laurent Wauquiez, a French conservative lawmaker, said Trump’s popularity is revealing of a general trend that has traversed the Atlantic.

“What it shows is that in democracies today, citizens no longer want people to tell them what they should think, what they should say. That’s what makes Donald Trump seductive,” Wauquiez told France 2 Television.

In the northern Indian city of Lucknow, one software company executive said he has been impressed by Trump’s muscular rhetoric.

“Trump looks like a tough guy,” said Rohitash Sharma. “He has clarity of idea, and he means business. He has advocated the use of enhanced interrogation techniques, if these improve the protection and safety of the country. He has a clear road map on how to protect his country from extremist forces.”

Though no fan, Ecuadorean President Rafael Correa said a Trump presidential win could be a political gift to Latin America’s left, which is recovering from a string of electoral defeats in Argentina, Bolivia and Venezuela.

“The most convenient for Latin America is a Trump victory, because his rhetoric is so clumsy, so basic, that I think it would awaken reactions in Latin America,” Correa told a group of radio journalists Monday. “I think a guy like him would be very bad for the US (but) for the progressive movement in Latin America, it could be positive.”

For weeks, a Canadian website has poked fun at Trump by inviting disaffected Americans to move to an island off Nova Scotia. On Super Tuesday, as the returns rolled in, searches for “How can I move to Canada” on Google spiked by more than 350% in four hours, Google editor Simon Rogers tweeted. A social media link posted by Toronto city councilman Norm Kelly that gives helpful directions on how to apply for Canadian citizenship received over 37,000 retweets.

Bruce Arthur, a Canadian sportswriter and political commentator, tweeted this after Super Tuesday: “To my American friends, I have an eight-person tent that I can set up in the forest behind my house but you may need your own air mattresses.”