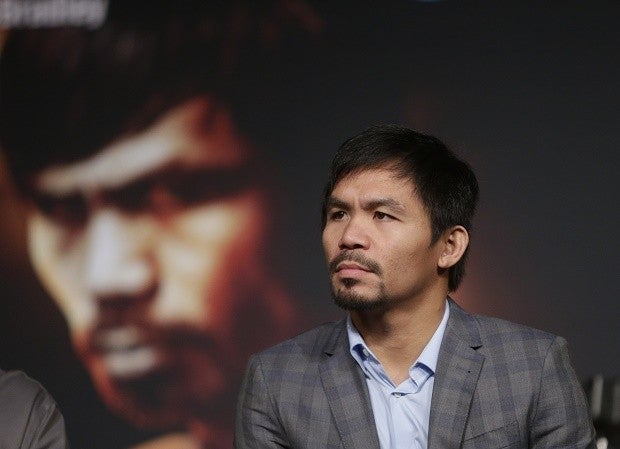 “It is advisable for Pacquiao to postpone his April 9 bout to a date weeks after the elections, to avoid probable legal repercussions,” Brillantes said in a statement.

He pointed that pushing through with the fight, with its massive media exposure a month before the May 9 elections, would undeniably provide Pacquiao undue advantage over the other Senate aspirants.

“As professional boxing is his main profession, to allow him to exercise his profession during the campaign period would give him added exposure, which is disallowed in respect of movie actors and actresses, TV and radio broadcasters and other national celebrities. Pacquiao is not only a nationwide, but a worldwide personality,” Brillantes said.

Pacquiao’s bout not only comes in the middle of the campaign period but also on the first day of the voting period for overseas absentee voting (OAV), he said.

It would be difficult for the boxing champ to deny that the scheduling was not deliberate, he said.

“In this instance, the fight is held abroad, which will cater to overseas voters in view of the worldwide coverage,” Brillantes said.

The Las Vegas blockbuster with its pay-per-view component allows Pacquiao additional earnings, aside from free massive media exposure for his senatorial campaign, he said.

“Note that during the campaign period, product endorsements of known personalities, who are candidates, are prohibited. The reason is it provides added propaganda advertisements to one’s candidacy besides financial earnings from such product endorsement,” Brillantes said.

“Pay-per-view contract, when implemented on the fight day, not only provides Pacquiao with financial benefit but also extends additional exposure to himself, well beyond the allowed period of time for political airtime,” he added.

Comelec Chair Andres Bautista on Tuesday admitted that the poll body might not have the authority to stop the fight of Pacquiao with Bradley.

Bautista said, however, that what the Comelec may have control over the expected massive media coverage of the event.

The Legal Network for Truthful Elections has likewise encouraged Pacquiao to postpone his fight if he believes in having an “equal playing field among candidates.”

Earlier, former Sen. Rene Saguisag asked the Comelec to advise Pacquiao to reset his fight to ensure that he does not get unfair advantage over his rivals.

Former Akbayan Rep. Walden Bello has also petitioned the Comelec to compel Pacquiao to postpone his fight with Bradley as it would give the boxer undue advantage over other bets.

Bello, a senatorial candidate, asked the Comelec to determine if the forthcoming boxing match violates the Fair Elections Act.

Violations of election laws carry a penalty of one to six years imprisonment, removal of right to vote, and disqualification from holding public office.

The Comelec en banc has asked Pacquiao to submit a comment on the issue.TVJ