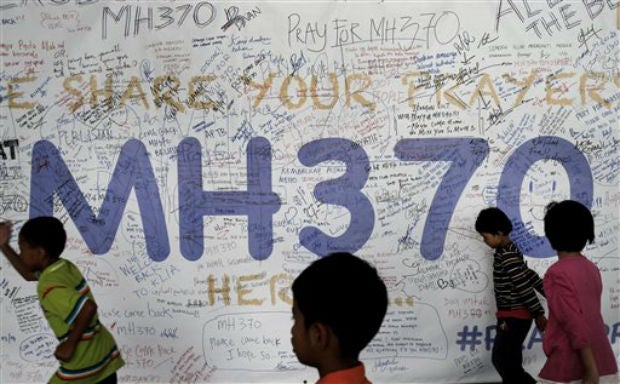 In this March 13, 2014, photo, children run past dedication messages left for passengers and others involved with the missing Malaysia Airlines jetliner MH370 on the walls of the Kuala Lumpur International Airport, in Sepang, Malaysia. A fevered hunt for more wreckage from missing flight MH370 on La Reunion island turned up no new clues Sunday, Aug. 2, 2015, as authorities said metallic debris found by locals did not come from an airplane. AP FILE PHOTO

PETALING JAYA CITY, Malayasia–CNN has reported that a piece of wreckage from a Boeing 777 has been found in the Mozambique coast, adding that it might be from the missing Malaysia Airlines flight MH370 plane.

The report published Wednesday claimed that a US official had told CNN of the wreckage.

“The newly discovered debris is on its way to Malaysia for further examination. The wreckage is a piece of horizontal stabiliser skin,” the official said.

It also reported that another aviation source had said that there was no record of a missing Boeing 777 besides the Beijing-bound flight that disappeared on Mar 8, 2013.

CNN said they had contacted Malaysia Airlines, who called the identification “speculative”.

So far, the only debris which was confirmed to be from the plane was found on Reunion Island in September last year.

Flight MH370 had disappeared in the early hours of March 8, with 239 passengers on board.

Two years on, there has been no finalized information on what had happened to the aircraft or its passengers and crew.TVJ

Mystery of Flight MH370 over? Part of wing found