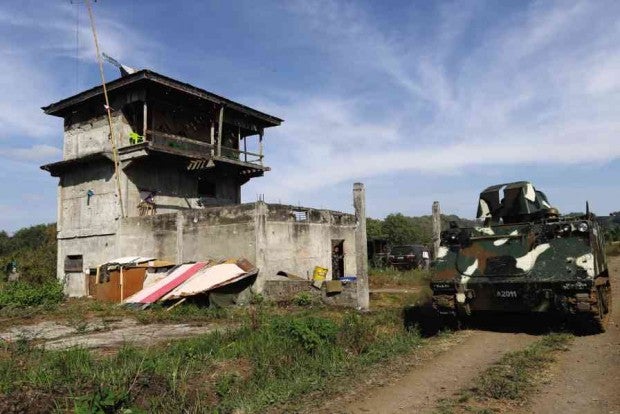 AN ARMY tank enters a camp believed to be used by Moro gunmen who have pledged allegiance to Isis in Butig town, Lanao del Sur province. JEOFFREY MAITEM/INQUIRER MINDANAO

ZAMBOANGA CITY—Police are exercising caution in linking the Islamic State of Iraq and Syria (Isis) to the attempted assassination of a popular Saudi cleric and a Saudi Embassy official in a university campus here.

Chief Insp. Helen Galvez, spokesperson for the city police, said that while the investigation of the shooting of Saudi cleric Dr. Aaidh ibn Abdullah al-Qarni and Sheik Turki Assaegh, the religious attaché of the Saudi Embassy in Manila, was ongoing, police were not linking the attack yet to Isis, an international terror network that has called on followers to launch “lone wolf” attacks against Isis targets.

Al-Qarni is said to be on the Isis hit list.

Galvez said only one thing was certain—the suspect, who was killed when Al-Qarni’s bodyguards responded to the attack, was the gunman.

Two other suspects are in police custody.

Rugasan approached Al-Qarni and Assaegh after Al-Qarni delivered a lecture at WMSU and, without warning, opened fire as the two Saudi officials were boarding their vehicle.

Al-Qarni, a renowned international lecturer and author of many inspirational and motivational books on Islam, suffered three gunshot wounds in the shoulder, left arm and abdomen. He is now out of danger.

Assaegh suffered gunshot wounds in the thigh and leg. He is also out of danger.

Their police escorts fired at Rugasan and arrested two other suspects in a separate operation, according to Galvez.

She said the two arrested suspects were being interrogated.

In a tweet, J.M. Berger, a fellow at the Program on Extremism of George Washington University in Washington D.C., expressed suspicion that Isis was behind the assassination attempt on Al-Qarni.

But Galvez said police were still trying to determine the motive for the attack and that a special investigative task group had been created to do the job.

The military has repeatedly denied the existence of Isis in Mindanao, although it admitted that there are Isis-inspired groups operating on the island.

The National Ulama Conference (NUC) of the Philippines said it “strongly condemns” the attack on Al-Qarni.

In a separate statement, the Saudi Embassy in Manila said Al-Qarni visited the city “at a personal invitation from a religious association in Zamboanga.”

The embassy said it also immediately sent a private jet to the city to fetch Al-Qarni and his entourage for a complete medical checkup in Manila.

“Suddenly there were gunshots,” said Kasim, who was at the scene of the attack.

Isis militants who control vast swathes of Iraq and Syria had called on “lone wolves” to attack Al-Qarni and several other Saudi clerics whom they accused of apostasy in the latest issue of Dabiq, their monthly online magazine.

The Philippine government should investigate whether Isis had influenced the shooting, international security analyst Stephen Cutler told reporters in Manila.

“It’s possible it is Daesh-related because he was on this hit list, but I don’t know yet,” the American said, using an Arabic abbreviation for the Isis group.

Tuesday’s shooting also came as the Army quelled a rampage by an obscure armed group that pledged allegiance to Isis in Butig, a poor farming town some 200 kilometers northeast of Zamboanga.

At least 12 militants and five soldiers were killed while more than 30,000 people were displaced over several days of fighting, which ended as the Army seized the gunmen’s main camp over the weekend.

Saudi media outlets described Al-Qarni as a senior Islamic scholar and he has more than 12 million followers on Twitter. In his book “Awakening Islam,” the French academic Stephane Lacroix included Al-Qarni on his list of “the most famous” Saudi preachers.

Last week, the Saudi Embassy asked local police for increased security for its premises, as well as for the Saudi national airline due to an unspecified threat, said Department of Foreign Affairs spokesperson Charles Jose.

Zamboanga, 800 kilometers south of Manila, is one of the largest cities in Mindanao, an area troubled by a decades-long separatist rebellion by the mainly Catholic nation’s Muslim minority that has claimed more than 100,000 lives.

The port city has a mixed Christian and Muslim population, and has been a frequent target of attacks by local Muslim militant groups. Julie Alipala, Inquirer Mindanao, with a report from AFP