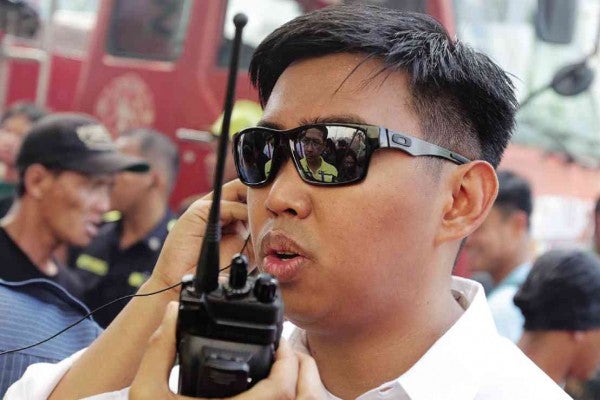 Binay filed a motion for judicial determination of probable cause and to defer a warrant of arrest before the anti-graft court Third Division.

He said there was no probable cause to try him for the charges.

He said he could not be charged for graft just because he signed the Bids and Awards Committee (BAC) resolutions, contracts, notice of awards, summary of cost estimates, individual project programs of work, and disbursement vouchers for the Phase III to V of the construction of the Makati City Hall Building II.

He said the information against him did not state any overt action of manifest partiality, evident bad faith and gross inexcusable negligence.

The information also did not state any overt action in his alleged offense of falsifying the affidavits of publication, he added.

“In this case, no specific overt acts were sufficiently alleged in the Resolution and Information … with respect to his role in supposedly falsifying the affidavits of publication,” Binay’s motion said.

“It is simply absurd how such act could be attributed to Binay when he was not even a signatory or he author of these documents,” he added.

Binay said the Ombudsman “in a desperate attempt” even linked him to the falsification charge just because he approved the BAC resolutions.

While the Ombudsman has yet to charge him for malversation, Binay mentioned the charge in his motion and said there was also no probable cause for the offense.

He said he could not be charged for malversation just because of his act of signing the disbursement vouchers for the release of the payment to MANA Architecture and Interior Design Co. for the design of the building.

Binay said he only paid the obligations of the city hall carried over in his term from his father’s stint as Makati mayor.

“If there were any irregularities that attended the execution of the contract, Binay Jr. would not have been privy thereto, and would therefore have had no cause to question the same. Thus, as head of the procuring entity, it was his duty to honor the obligation incurred by the local government unit,” Binay said.

Binay said there was no evidence presented to show he misappropriated public funds.

There is also no probable cause to charge him for conspiracy because there are no overt acts in the information that would show he participated in the rigging the bidding process or in the falsification of public documents.

Binay asked the court not to subject him to the “trauma” of trial because no probable cause exists to try him for graft and falsification.

“Should this Honorable Court determine that the evidence on record clearly fails to establish probable cause, it should then order the immediate dismissal of these cases,” Binay said.

The Office of the Special Prosecutor filed two counts of violations of Section 3(e) of the Anti-Graft and Corrupt Practices Act, as well as six counts of falsification of public documents against Binay for his involvement in the alleged rigging for the construction of the P2.2-billion Makati City Hall Building II, deemed the country’s priciest building.

The Ombudsman prosecution did not include in the charge sheet the father Vice President Jejomar Binay, who was earlier indicted by the Ombudsman with his son.

The Vice President is immune from suit during his term in office, so the Ombudsman said it would file the charges against him after the end of his term.

In indicting the Binays, the Ombudsman said the Vice President and his son approved the Bids and Awards Committee resolutions, notices of awards, contracts and payments using unnumbered/undated disbursement vouchers and obligation requests despite the anomalies.

Binay Jr.’s graft charges stemmed from allegations that Binay and other Makati city officials made it appear that Hilmarc’s Construction was the lowest bidder even though there was no actual public bidding.

Binay first graft charge involved the contract for Phase IV of the construction with Hilmarc’s despite the absence of the project’s accepted and approved plans and specifications, as well as the failure of Hilmarc’s to post its performance security.

Binay also approved the release of the P649.2 million for the contract to Hilmarc’s even though the accomplishment report was baseless and the supporting documents had deficiencies.

Binay’s second graft charge involved the contract for Phase V where Binay and other Makati city officials made it appear that Hilmarc’s gave the lowest calculated bid even though there was no actual public bidding.

Binay also allegedly entered into the contract despite the absence of the project’s accepted and approved plans and specifications, and the failure of Hilmarc’s to post its performance security.

Binay also released the P141.6 million payment for the contract to Hilmarc’s even though the accomplishment report was baseless and the supporting documents had deficiencies.

Meanwhile, Binay’s falsification of public documents charges stemmed from his alleged role in falsifying a July 7, 2011 issue of Balita newspaper as well as an affidavit of publication to make it appear that an invitation to apply for eligibility and to bid was published.

Binay was also charged of falsifying a publisher’s affidavit pertaining to the publication of an invitation to bid for the construction of the building when in fact the publisher denied executing such affidavit.

Binay Jr. had been ordered dismissed as Makati mayor and perpetually barred from public office in connection with his administrative offense for misconduct and dishonesty.

Binay has posted a P204,000 bail bond for the charges ahead of the court’s determination of probable cause.