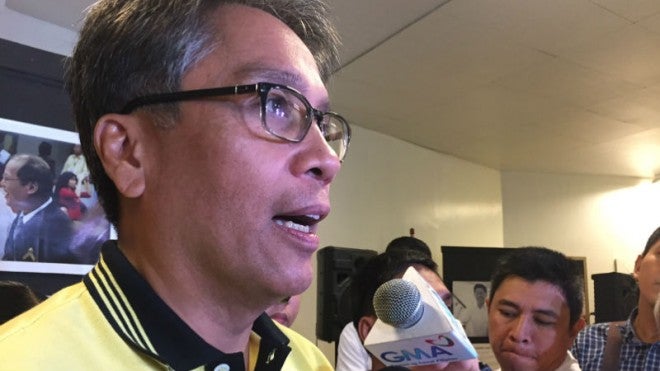 STILL trailing his rivals in the voter preference surveys, Liberal Party (LP) standard-bearer Mar Roxas startled his supporters yesterday when he made an appeal that sounded like a Twitter hashtag: “Dagdag pa more! (More effort, please).”

In a rare moment of candor, Roxas acknowledged the lead that his opponents had built up in opinion surveys in the past few months.

He said the campaign and his believers needed to show him more love.

“This battle is not easy,” he told hundreds of supporters at the Olivarez Gym in Parañaque, the first stop in a three-city swing yesterday by the LP slate through southern Metro Manila.

Along with five senatorial aspirants on the ruling party’s lineup, Roxas and his running mate, Leni Robredo, had also visited Las Piñas and Muntinlupa cities in hopes of gathering support from the southern reaches of the nation’s capital.

“Leni started out at 1 percent, now she’s at 20,” Roxas said of the Camarines Sur representative and widow of Interior Secretary Jesse Robredo.

“Our request to you is this: ‘Dagdag pa more,’” he said, eliciting a wave of good-natured laughter from the yellow-shirted crowd.

Then Roxas, with a hint of discouragement in his words, proceeded to talk about what his and Robredo’s low survey numbers might mean for the campaign.

“If Leni and I stay at 20 [percent] we will not be able to continue ‘daang matuwid,’” he said, referring to the good governance mantra of the Aquino administration.

“Our only request is: dagdag pa more para sa daang matuwid!” he said before ending his speech.

Roxas got 18 percent, sliding by two points from a month ago.

Speaking to reporters after the event, Roxas, a former investment banker and scion of the wealthy Araneta clan, explained what he meant.