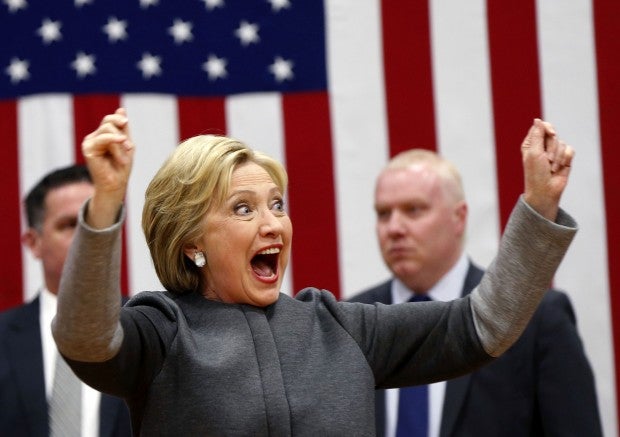 Democratic presidential candidate Hillary Clinton acknowledges the crowd as she arrives to speak at a “Get Out The Vote” campaign rally in Norfolk, Va., on Feb. 29. AP

WASHINGTON—A generation gap among black voters could be critical for Hillary Clinton and Bernie Sanders on Super Tuesday when Democrats vote in 11 states.

For Sanders to have any hope of overall success with black voters, who overwhelmingly supported President Barack Obama in 2008 and 2012, he’s going to have to not only win motivated young black voters, but persuade older voters who’ve supported the Clintons for years to defect to him.

“Bernie has been able to appeal to younger voters based on many of the issues he has raised in his platform,” said D’Andra Orey, a political science professor at Jackson State University in Mississippi. But, Orey added, the question is whether older blacks believe Sanders “is a viable candidate.”

Clinton is hoping her popularity with older black voters pays dividends on Super Tuesday. Black voters make up 15 percent of all voters in the Super Tuesday states, according to the Pew Research Center, with African-American voters making up almost 1 in 3 voters in Georgia and Alabama.

Those voters helped Clinton win the South Carolina Democratic primary handily with 8 in 10 voting for her, and are expected to be difference-makers for Clinton throughout the South.

Sanders now is pinning his hopes on states like Minnesota, with fewer black voters. But he’s also been trying to make inroads among blacks, meeting with civil rights leaders and touting his civil rights work in the 1960s.

He’s also been talking up his platform of fighting economic inequality and reforming the criminal justice system in addition to his stump speech on Wall Street excesses and the need for campaign finance reform. Before losing the Nevada caucuses and the South Carolina primary, he’d picked up endorsements from moviemaker Spike Lee; Ben Jealous, the former president of the NAACP civil rights group; and singer and activist Harry Belafonte.

“We have got to achieve the day when young black men and women can walk the streets without being worried about being harassed by a police officer,” he told a recent South Carolina crowd.

Clinton, meanwhile, has been touting her work as secretary of state for Obama and working connections built with the black community during her husband Bill Clinton’s presidency. She’s picked up endorsements from former NAACP president Kweisi Mfume; the Congressional Black Caucus’ political arm, and a slew of elected officials. She’s also advocated for programs like universal child care, additional money for public schools and counseling to help keep teenagers out of the criminal justice system.

“I will build on the progress that President Obama has made,” she said in a recent trip to Chicago.

Right now, all indicators show a clear generation gap, said Fredrick Harris, director of the Institute for Research in African-American Studies at Columbia University. Harris said one of his students put it bluntly: “The black ‘old heads’ are the ones supporting Hillary and the younger people are pushing toward Bernie.”

Part of Sanders’ appeal to some black voters is the feeling that traditional politicians have never taken care of important black issues, said South Carolina Rep. Gilda Cobb-Hunter, who said she won’t be endorsing either candidate.

Sanders’ message is “resonating because people are not feeling that they have been listened to by establishment politicians,” said Cobb-Hunter.

Not all young black voters are on Sanders’ side, said Cathy Cohen, a University of Chicago political scientist who studies black millennial voters. Cohen said some students are more likely to support Sanders because in university environments “there’s great excitement about Bernie Sanders.”

But “if you’re a young African American and you’re somehow immersed in a more traditional civil rights network, including a black church, where there’s more talk about her, you’re more likely to be mobilized around the Hillary Clinton campaign,” Cohen said.

The eventual support each candidate gets from the black community may swing on turnout. Turnout is usually much lower during primaries than during general elections, with the candidate with the most die-hard supporters and the best organization usually coming out on top.

That favors Clinton, Harris said, because the millennials, despite their willingness to protest over the last few years, have not yet proven that they will exercise political power through voting.