Pacquiao should postpone Bradley fight until after polls—Brillantes 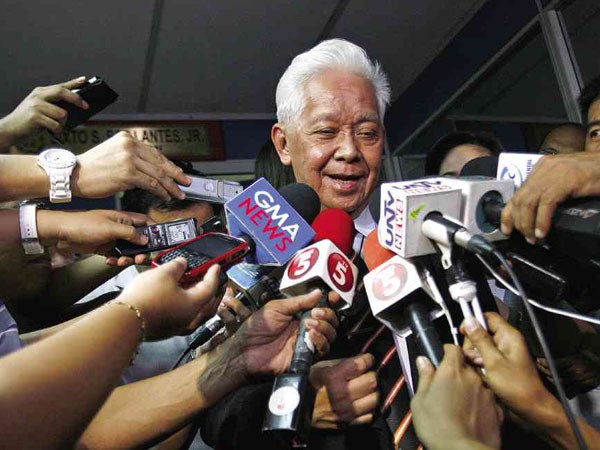 Former Commission on Elections (Comelec) chairman Sixto Brillantes Jr. on Tuesday advised senatorial aspirant and boxing icon Manny Pacquiao to postpone his upcoming fight with Timothy Bradley as a coverage of the match would give him “enormous advantage” over other candidates seeking the same post.

“Advisable is for Pacquiao to postpone his April 9 bout to a date weeks after the elections, so as to avoid probable legal repercussion,” Brillantes said in a statement posted on his Twitter account.

“Not farfetch is the claim that when Pacquiao agreed to the April 9 fight, he was well aware then that it is barely 1 month before Election Day and such coverage would surely provide him an enormous advantage over all other senatorial candidates. Difficult would be to deny that it was not deliberate,” he said.

Likening Pacquiao’s case to the prohibition of product endorsements during the campaign period, Brillantes said the pay-per-view coverage of the Sarangani representative’s fight “appears to be analogous to a product endorsement of a candidate.”

“The reason being it provides added propaganda advertisement to one’s candidacy besides earning financially from such product endorsement,” Brillantes said.

“Pay-per-view contract, when implemented on the fight day, not only provides Pacquiao with financial benefit but also extend additional exposure to himself well beyond the allowed period of time for political airtime,” he added.

The former Comelec chief said to allow Pacquiao, who is running under the opposition ticket of Vice President Jejomar Binay’s United Nationalist Alliance, to continue with his bout with Bradley would be unfair to other “national celebrities.”

“As professional boxing is his main profession, where he earns billions of pesos, to allow him to exercise his profession during the campaign period would give him added exposure which is disallowed in respect to movie actors and actresses, TV and radio broadcasters and other national celebrities. Pacquiao is not only a nationwide but a worldwide personality,” he said.

In February, independent senatorial candidate and former Akbayan representative Walden Bello filed a petition asking the Comelec to compel Pacquiao to postpone his fight with Bradley as it would give the boxer undue advantage over other bets.