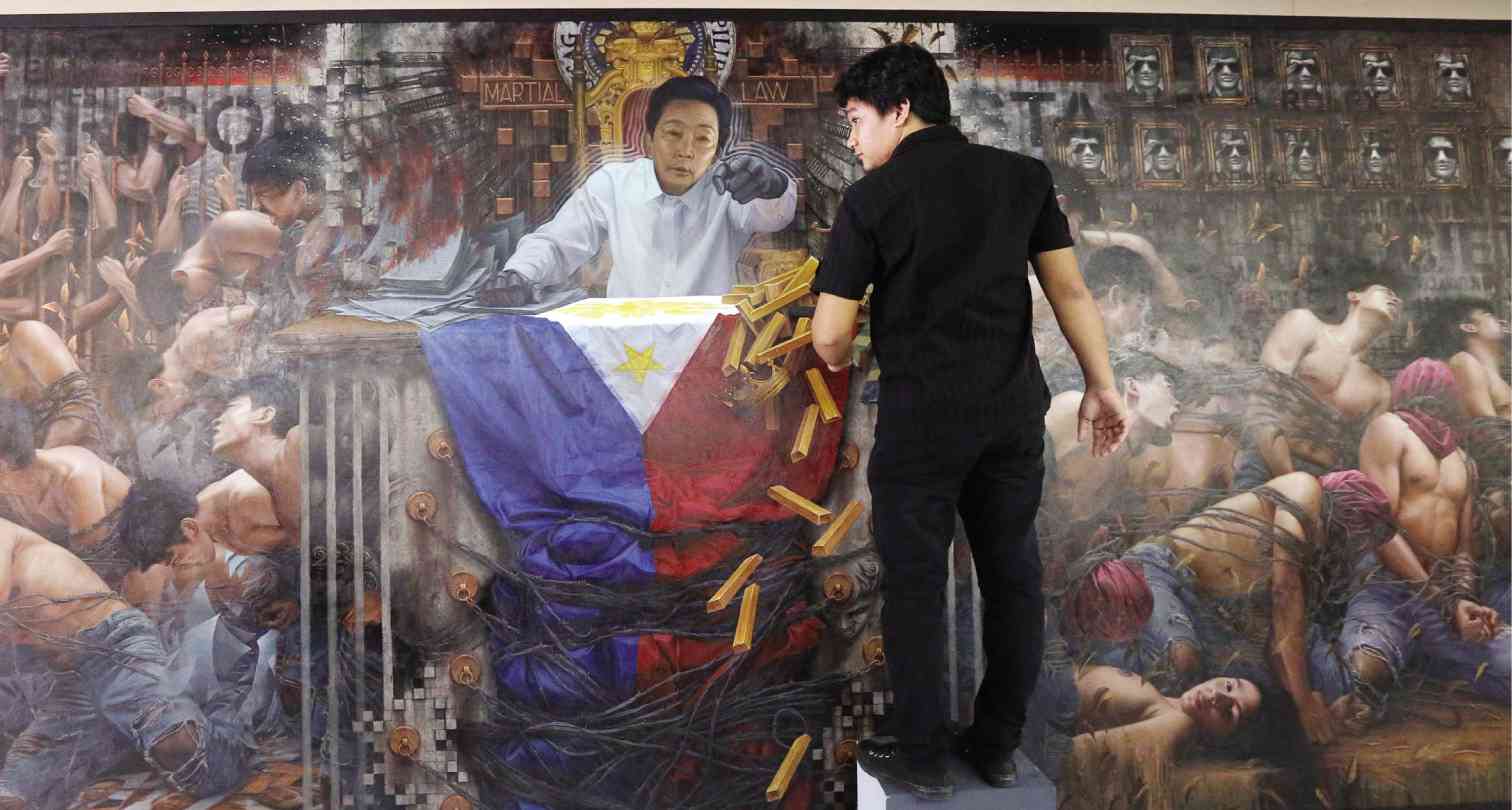 FACE-TO-FACE WITH MARTIAL LAW MEMORIES Authoritarian President Ferdinand Marcos seems to be confronting young Batanes artist Randalf Dilla in this mural titled “Salvaged Memories, Salvaged Lives.” The oil and acrylic mural was commissioned by Hiraya Gallery to remind Filipinos of the horrors of martial law. It is part of the exhibit “Tyranny of Hindsight,” which opens on Sept. 23 in connection with the 43rd anniversary of the declaration of martial rule. Dilla, 28, was not yet born at the time, but assiduous research gave him enough insight into what he described as a reality that should not be forgotten or rewritten. MARIANNE BERMUDEZ

TUGUEGARAO CITY, Philippines—Amid claims that martial law was a golden age in Philippine history, millennials should study what the peace and order that supposedly marked the period represented, Sen. Grace Poe said here on Monday.

Was there peace and quiet because people’s rights were being diminished, or were they truly being protected, Poe asked.

The senator, who is running for President as an independent, made the statement when asked by a student during a public consultation here to comment on the view that millennials, who did not experience the rule of the late dictator Ferdinand Marcos, consider martial law a golden age.

According to Poe, during the period when she and her running mate, Sen. Francis Escudero were growing up, they knew no other government than what was prevailing during martial law. “We thought that it was always like that, that you are not free to share your views, that you can’t be sure you would be allowed to roam around at night,” she said.

But she said students should look into what the people’s experiences then indicated. “For our students, when they say that it was peaceful and quiet, we should think about why there was peace and quiet. Were our rights diminished, which was why we were quiet, or was it because there was real protection for us?” she said.

Poe said that for her, there could be no security if there was no real justice.

She also noted that the country has a law recognizing the sufferings of martial law victims, which also provides remuneration to them.

Poe then passed the microphone to Bayan Muna Rep. Neri Colmenares, a student activist during the period who was detained and tortured. Colmenares is running for senator under the Poe-Escudero slate.

Colmenares said there was no way martial law could be considered a golden era.

He said the military arrested him when he joined demands for the government to bring back student councils and school papers, which had been banned. He was mauled, subjected to electric shocks and burned with cigarettes for his actions.

Kris Aquino on martial law: Will you let freedom be taken from us again?