THE NATIONALIST People’s Coalition (NPC), the country’s second-largest political party, has endorsed the candidacies of Senators Grace Poe and Francis “Chiz” Escudero, boosting the pair’s chances of being elected the next President and Vice President in the May 9 national elections.

Poe and Escudero accepted the NPC endorsement, but they vowed to remain independent, saying they looked to the party only for organizational support.

The two senators are leading their rivals in the latest voter preference polls, topping the choices in all voter categories.

But Poe’s political fate hangs in the balance, with the Supreme Court still deliberating on challenges to her citizenship and Philippine residency.

A ruling is expected in the next few days.

Aggabao, speaking at a news conference, said the majority of NPC members chose Poe and Escudero because of the pair’s platform of inclusivity and plan of building on gains instead of just maintaining the status quo.

“The party feels that in these past decades of division and partisanship, these candidates represent the best hope for a unified push for sustainable development. We chose them because they are clean, bold, hardworking and helpful,” Aggabao said.

Aggabao said he expected all NPC members to toe the party line, including Cojuangco’s son, former Pangasinan Rep. Mark Cojuangco, who is openly campaigning for Binay.

“He (Cojuangco) said he would follow the party stand, and we expect him to do just that,” Aggabao said.

Quezon Rep. Mark Enverga, spokesperson for the NPC, said party members like Cojuangco and Zamboanga del Sur Gov. Antonio Cerilles who supported other presidential candidates had all agreed on a united party stand before the selection of Poe and Escudero.

“They are just waiting for a clear directive from the NPC and this is it,” Enverga said.

Aggabao said the NPC decided to make the endorsement despite the “precarious state” of Poe’s candidacy “to show that we believe that she has a strong case.”

The Commission on Elections (Comelec), granting the petitions brought by Poe’s enemies, had disqualified Poe from the presidential race, saying she was not a natural-born Filipino and she did not meet the 10-year residency requirement for candidates.

Poe—abandoned in a Catholic church in Jaro, Iloilo province, shortly after birth in 1968 and was adopted by movie actor Fernando Poe Jr. and his wife, movie actress Susan Roces, and later became a US citizen after marriage but returned to the Philippines in 2005—has asked the Supreme Court to overturn the Comelec’s decision.

Speaking at a news conference in Tuguegarao City on Monday, Poe thanked the NPC for endorsing her and said she believed the party announced its choice ahead of the Supreme Court ruling to make a stand for the right thing.

Had the party waited for the court’s ruling, it would have appeared not standing up for its position that the people should be given the chance to choose their leaders, she said.

Escudero also thanked the NPC for endorsing him, but said he and Poe would not join the party, as they preferred to remain independent.

“This would not affect our goals, our platforms, our plans for the country. We thank the NPC for joining us in our goals, not the other way around,” he said. 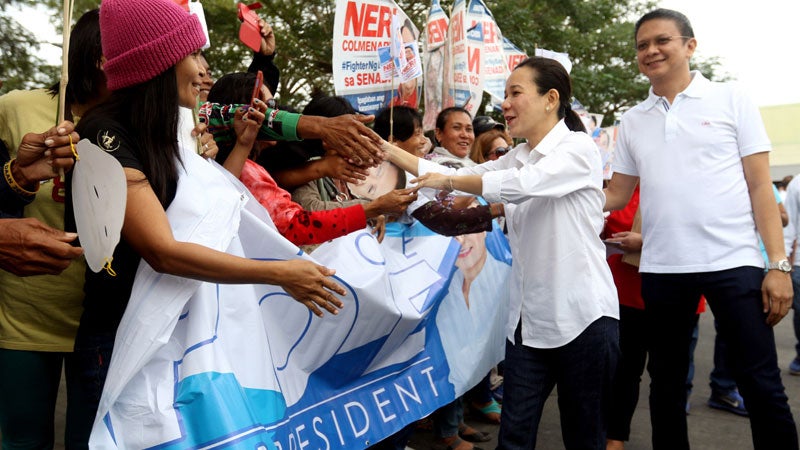 Escudero was a member of the NPC until 2009.

Poe said she and Escudero expected organizational, not financial, support from the NPC.

As independent candidates they do not have the machinery that their rivals have, she said.

“This is a big help to us because the NPC has a big presence in various places in the country,” she said.

Commenting on the apparent challenge to its machinery, the ruling Liberal Party (LP) yesterday said there seemed to be “confusion” in the NPC.

Akbayan Rep. Barry Gutierrez, spokesperson for the LP coalition, said some NPC members who had declared support for Roxas, the administration’s presidential candidate, were not consulted about endorsing Poe and Escudero.

“I’ve talked to some of (Roxas’) supporters from the NPC and they said they had absolutely no knowledge of this ‘endorsement,’” Gutierrez said in a statement.

“Apparently, there’s some confusion within their ranks,” he said.

He said 90 percent of NPC members voted for the pair, but added the party would talk to the holdouts.

“We are confident that the party will be able to reel in the remaining 10 percent,” Gatchalian said.

“Bongbong is the No. 1 choice, but we don’t have an official decision yet on who to support for Vice President,” Del Rosario said.

Playing down the NPC endorsement of Poe and Escudero, Mon Ilagan, a party member but working as spokesperson for Binay, said he could not easily say that all members of the NPC would support Poe and Escudero even if the pair had been endorsed by the party.

Many local officials who are members of the NPC support Binay, Ilagan said in a statement. With reports from Marlon Ramos, Christine O. Avendaño in Manila and Joey Gabieta, Inquirer Visayas