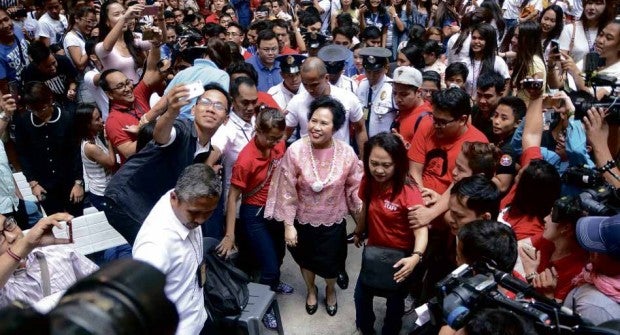 CEBU CROWD Presidential aspirant Sen.Miriam Defensor-Santiago arrives on the campus of the University of Cebu, one of the most highly populated schools in Cebu City. CHRISTIAN MANINGO/CEBU DAILY NEWS

SEN. MIRIAM Defensor-Santiago yesterday urged college students of voting age to help her win May’s presidential election by asking their elders to vote for her.

Santiago remains a favorite on school campuses but is raising the rear in voter preference polls. Campus polls have her leading the five-way race, largely because of her strong presence on social media.

“It appears that if all university students go out to vote in the May elections and influence their peers and elders to throw their support behind me, I will be the next President of the Philippines,” Santiago said in a statement.

In three campus polls conducted after the Feb. 9 kick-off of the campaign, Santiago was the clear front-runner among students of the University of Asia and the Pacific (UA&P), Holy Angel University (HAU) in Pampanga province and Colegio de San Juan de Letran in Calamba City in Laguna province.

Santiago focuses her campaign on campuses where students love her speeches that are peppered with insights, insults and jokes.

On Friday, the senator spoke before students of University of Cebu in Cebu City, one of the most highly populated schools in the Visayas.

Santiago and her running mate, Sen. Ferdinand “Bongbong” Marcos Jr., are banking on the millennial vote (people 18 to 35 years old), which accounts for 37 percent, or 20 million, of the Philippines’ 54 million voters.

Marcos earlier urged young voters to be more discerning in their choice of candidates.

“Look for candidates who have the track record and seek to unite rather than divide the country,” said Marcos, son of the late strongman Ferdinand Marcos, who placed the Philippines under martial law for 18 years and was toppled in the Edsa People Power Revolution in 1986.