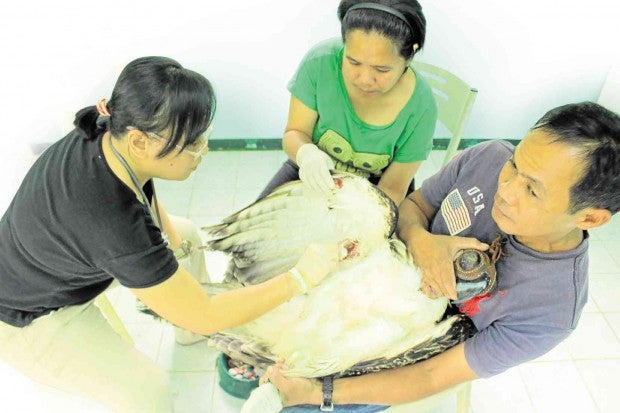 PHILIPPINE Eagle Foundation personnel treat the wound suffered by Philippine eagle Matatag, who was shot by a farmer a year after the eagle was released to the wild. PHOTO FROM PHILIPPINE EAGLE FOUNDATION

DAVAO CITY—Matatag, the rehabilitated Philippine eagle that was released to the wild last year, was wounded when shot by a farmer in a hinterland village in Baguio District here on Sunday.

The adult male eagle (Pitecophaga jefferyi) was released in Mt. Apo last year. It moved 13 kilometers north from his release area to the territorial borders of the Obu Manuvu community in Barangay Carmen here.

On Sunday, however, a farmer brought the wounded eagle to the Philippine Eagle Center in Malagos, admitting that he shot it with a .22-cal. rifle.

The farmer, Tiburcio Aparesio, 24, said he accidentally shot the bird and brought it to the center after realizing it was an eagle.

Dr. Anna Lascano, the center’s veterinarian, said the eagle was wounded in the right wing.

Chief Insp. Leonardo Pamplona, Baguio District police precinct commander, said the center called the precinct about the eagle being shot and the perpetrator bringing the eagle to center.

He said the brothers are detained at the precinct for violating Republic Act No. 9147, also known as the Wildlife Resources Conservation and Protection Act.

But the Philippine Eagle Foundation (PEF) said a witness supported Rolando’s claim that it was he who shot the eagle.

Matatag is still under observation, but appears to be responding well to medication, Lascano said.

A weak Matatag spent at least three years in rehabilitation at the center after it was turned over in 2011.

It was released more than a year ago to forests being claimed as ancestral land of the Obu Manuvu tribe.

Salvador called on people to be more involved in the protection of Philippine raptors.