‘I am what I am because of martial law’ 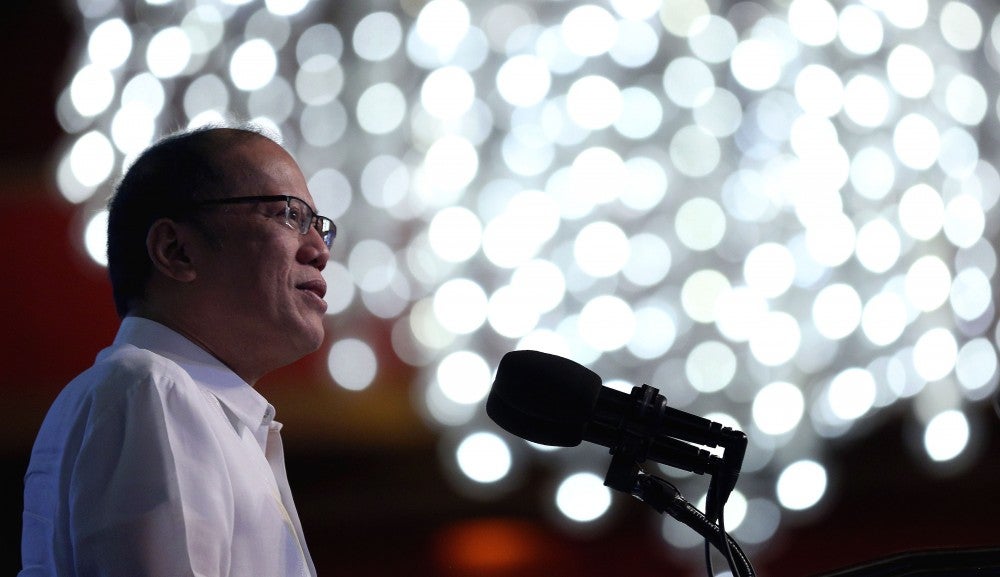 President Aquino on Wednesday said the dark period in his family’s life under the rule of the late dictator Ferdinand Marcos partly shaped the kind of person that he is today.

On the eve of the 30th anniversary of the Edsa People Power Revolution that toppled Marcos from power, Mr. Aquino recalled the agony of looking for a missing father, seeing his youngest sister confused but feeling their family’s anguish and, at 13 years old, being given the task of looking after his mother and siblings.

“I am what I am today because of what our family had gone through, and one of the most significant periods in our lives was the imposition of martial law in our motherland … I was 13 years old at that time and the life of my family was turned upside down,” Mr. Aquino said in a speech in Nueva Ecija province.

It was in this province, at Fort Magsaysay in Laur town, where the President’s father, opposition leader Sen. Benigno “Ninoy” Aquino Jr., was incarcerated along with Sen. Jose Diokno.

The two opposition leaders were detained for seven years, until Ninoy was allowed by Marcos to go to the United States for a triple heart bypass.

The whole Aquino family lived in self-exile in Boston, Massachusetts, for three years. In 1983, Ninoy decided to return to the Philippines to continue the fight for democracy.

He was felled by an assassin’s bullet on the tarmac of Manila International Airport on Aug. 21, 1983, which triggered massive protests that culminated in the bloodless Edsa People Power Revolution that forced the Marcoses out of Malacañang and swept Ninoy’s widow, Corazon, to power.

Thirty years later, Ninoy’s and Cory’s only son is about to end a six-year term as President, enjoying high trust and satisfaction ratings.

But three decades since Edsa, too, the dictator’s only son and namesake, Sen. Ferdinand Marcos Jr., is running for Vice President and his recent poll ratings may just bring him a heartbeat away from Malacañang.

To a question on whether the country should still celebrate Edsa even if many believe nothing much has changed 30 years after, Presidential Communications Secretary Herminio Coloma Jr. said Wednesday: “Filipinos celebrate and rekindle the spirit of Edsa, as it represents a high watermark in our history—the triumph of democracy and the defeat of dictatorship.”

“Demonstrating the primacy of people power is the Filipinos’ gift to the world. We paved the way to the peaceful dismantling of the Berlin Wall and the return of democracy in South Korea and Romania. The executive branch will continue to work closely with the judiciary to ensure that justice will be served for all those that suffered under the dictatorial regime,” Coloma said.

Coloma also said that the Human Rights Claims Board “is processing more than 76,000 claims from individuals and the families of those who were killed, tortured or who disappeared during martial law.”

“Funding for claims is from the proceeds of the recovery of ill-gotten wealth that was made possible through the [Presidential Commission on Good Government’s] efforts. The Philippines is probably the only country that has set up this institutionalized recovery and compensation processes through official government bodies,” Coloma said.

President Aquino recalled the day when his father was arrested, to the months that the entire family did not know where Ninoy was, and one day when his father’s personal belongings were returned to their home because, they were told, “he no longer needed them.”

“Think about it, try to put yourselves in my situation. You are 13 years old, and [your father’s] toothbrush was returned. When do you not need a toothbrush? We were so anxious,” he said.

When his family was finally allowed to visit Ninoy, President Aquino said his father, who was of large build, was so thin he had to hold on to his pants. Ninoy had neither his eyeglasses nor his watch, both of which were important to him.

The President recalled that his father was given only two shirts and two pieces of underwear. He also remembered how hot it was inside the detention cell.

In charge of family

It was at this time that his father told him to take care of his mother and sisters, President Aquino said.

His youngest sister, Kris Aquino, was only 2 years old at  the time.

“Most likely, she did not understand what was happening to us during those hours. But I saw how she put her head on our mother’s shoulder as our mother carried her, as if she felt how heavy and sad that moment was,” President Aquino said.

The President said his father and Diokno were kept in different cells that were both narrow and hot.

“They would only know that they were still both alive when one would sing ‘Lupang Hinirang’ and the other would respond with ‘[Bayan Ko],” Mr. Aquino said.

President Aquino gave almost the same speech, with the same strong message against martial law, to a crowd in the towns of Talavera, where he led a ceremonial switching on of a village electrification program, and San Jose, where he joined the Liberal Party-led campaign of Mar Roxas, Leni Robredo, and their senatorial candidates.

Mr. Aquino said martial law victimized not only his family but also millions of other Filipinos.

“Ours is just one of the many memories of the abuses of martial law. Millions of Filipinos who experienced the brutality of that time have stories to tell as well. It was the same government that the people gave the mandate to care and serve them but was cruel to them. When he was about to finish his two terms granted to him by the Constitution, Mr. Marcos found a way to remain in power,” Mr. Aquino said.