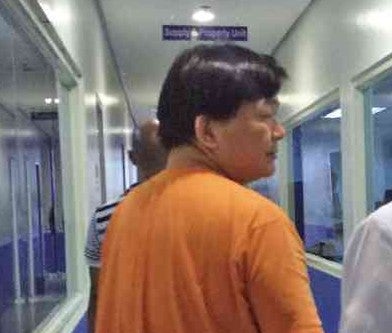 KUO under arrest Maricar B. Brizuela

Just like in her dream, a 20-year-old student found the chopped-up body of her mother in the stockroom of their house in Makati City on Tuesday, a day after the latter went missing.

Immediately after the discovery of the head and torso of Rowena Kuo, 47, whose arms and legs have yet to be found, her Taiwanese husband, Yuan-Chang Kuo, 46, was arrested on a charge of parricide. Investigators said that this was based on his confession to a relative that he had killed his wife and mutilated her body.

The victim’s daughter, Joanne Jane Tiongco, said that she found her mother’s body wrapped in a green blanket and hidden in the stockroom, which was on the third floor of their house on Taylo Street, Barangay Pio del Pilar in Makati City, around 9 p.m. on Tuesday.

This was after she dreamt that she was in the stockroom, talking to her mother who had gone missing on Monday morning.

“I woke up with doubts. I went up to the stockroom at the third floor and noticed that the lights were on,” she said, adding that she was with her younger stepsister whom she had asked  to accompany her.

In her statement to the police, Tiongco said that they were immediately met with a foul smell which they traced to a green blanket that concealed a body missing its arms and legs.

“When we checked the body, I knew it was my mother,” Tiongco told investigators.

According to her stepfather, her mother left their house around 9 a.m. on Monday.

Asked why her disappearance was not reported to the police, case investigator PO3 Ronaldo Villaranda said that the suspect had instructed Tiongco and the other children to wait for about a week before going to the authorities for help. The couple have four children together, although the police have yet to verify how long they were married.

The Taiwanese was placed in the custody of Barangay Pio del Pilar officials who later turned him over to the Makati City police.

Villaranda told the Inquirer that Rowena could have been dead for two days before she was found based on her body’s condition.

“We believe that the remaining body parts are still inside the house. We will send a team there to search the residence,” he added.

As for the motive, Villaranda said  the victim’s relatives had told investigators that the suspect had always been jealous of his wife and suspicious of her every move. The information, however, was still being verified by the police, he told the Inquirer.