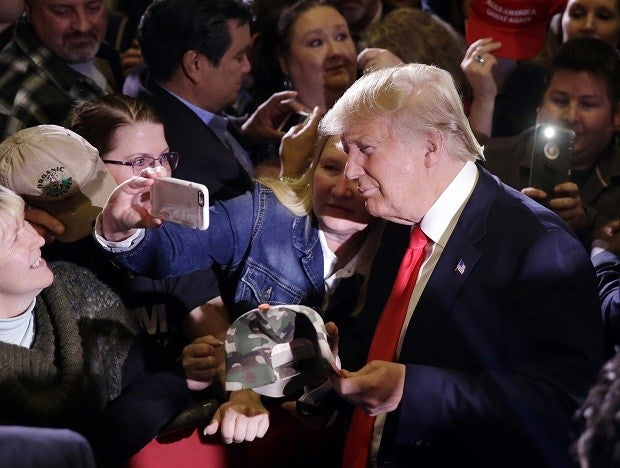 LAS VEGAS — Donald Trump decisively won Nevada’s Republican caucuses on Tuesday as his main rivals battled for second place in an increasingly urgent effort to slam the brakes on the Trump juggernaut.

Trump now has three straight victories — in the West, the South and Northeast — a testament to his broad appeal among the mad-as-hell voters making their voices heard in the 2016 presidential race.

Six in 10 caucus goers said they were angry with the way the government is working, and Trump got about half of those angry voters, according to preliminary results of an entrance poll.

Nevada was a critical test for Marco Rubio and Ted Cruz, the two senators battling to emerge as the clear alternative to the Republican front-runner. Rubio was out to prove he can build on recent momentum, while Cruz was looking for a spark to recover from a particularly rocky stretch in his campaign.

Rubio, already campaigning in Michigan as caucus results rolled in, was projecting confidence that he can consolidate the non-Trump voters who have been splintering among an assortment of Republican candidates, saying, “we have incredible room to grow.”

Cruz, a fiery conservative popular among voters on the Republicans’ right, finished a disappointing third in South Carolina after spending much of the past two weeks denying charges of dishonest campaign tactics and defending his integrity. Another disappointing finish in Nevada would raise new questions about his viability heading into a crucial batch of Super Tuesday states on March 1, including his home state of Texas.

Nevada’s caucusing played out in schools, community centers and places of worship across the state — a process that’s been chaotic in the past.

READ: Trump is betting on unorthodox campaign to pay off in Nevada

Trump is on a roll after winning primaries in New Hampshire and South Carolina. Cruz won the lead-off Iowa caucuses.

Nevada marks the first Republican nominating contest in the West and the fourth of the campaign as the candidates try to collect enough delegates to win the party’s nomination at the national convention in July.

Although Nevada has relatively few delegates, it is the first measure of voter sentiment in the vast western region, much as South Carolina was the first glimpse at the South’s preferences last weekend.

Nevada is 28 percent Latino, 9 percent Asian-American and leads the nation with the highest rate of people living in the country illegally, according to the Pew Hispanic Center. Its immigrant communities — 19 percent of its population was born outside the United States — have helped turn a once reliably Republican state into one that backed Obama twice. Many analysts attribute that to hardline Republican positions on immigration.

A Republican field that included a dozen candidates a month ago has been reduced to five, with former Florida Gov. Jeb Bush the latest to drop out after a disappointing finish in South Carolina. Ohio Gov. John Kasich and retired neurosurgeon Ben Carson remain in the race and could play spoilers as the trio of leading candidates, Trump, Cruz and Rubio, battle for delegates with an increasing sense of urgency.

Trump’s rivals concede they are running out of time to stop him.

The election calendar suggests that if the New York billionaire’s rivals don’t slow him by mid-March, they may not ever. Trump swept all of South Carolina’s 50 delegates, giving him a total of 67 compared to Cruz and Rubio who have 11 and 10, respectively.

There are 30 delegates at stake in Nevada, awarded to candidates in proportion to their share of the statewide vote so long as they earn at least 3.33 percent.

Rubio and Cruz have been attacking each other viciously in recent days, an indication they know Trump can be stopped only if one of them is eliminated. But neither of the first-term Hispanic senators is predicting victory in Nevada.

After finishing third in Iowa, fifth in New Hampshire and second in South Carolina, Rubio needs a win soon to support his theory that he is the primary beneficiary of Bush’s recent departure from the race. Rubio told supporters Tuesday before heading out to campaign in Minnesota and Michigan that he was the candidate who could best grow the Republican Party here.

The entrance poll survey was conducted for The Associated Press and the television networks by Edison Research as Republican voters arrived at 25 randomly selected caucus sites in Nevada.