Trump is betting on unorthodox campaign to pay off in Nevada 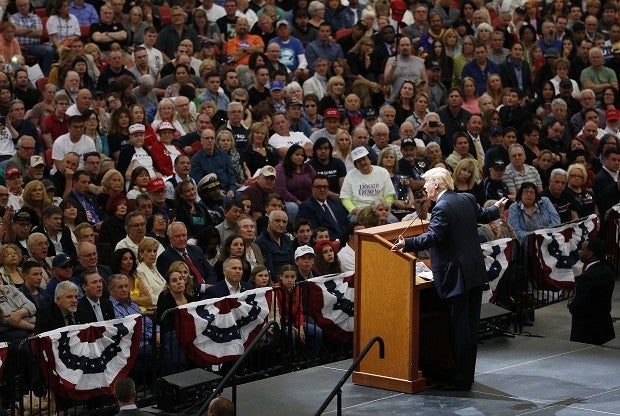 LAS VEGAS — Donald Trump is betting that his unorthodox campaign will come up a winner for the third straight primary contest in Nevada’s Republican caucuses on Tuesday, while senators Marco Rubio and Ted Cruz battled to emerge as the main challenger to the billionaire businessman.

The enthusiasm for Trump was on display Monday night at Trump’s caucus-eve event at Las Vegas’s South Point Arena, which drew an estimated crowd of more than 6,000. Trump is coming into Nevada with growing momentum following his primary victories in South Carolina on Saturday and New Hampshire earlier this month.

Trump told supporters he isn’t in love with the caucus system of choosing delegates to the party’s national nominating convention. The real estate mogul said he plans to visit numerous caucus sites Tuesday and expects to see his supporters there. He said, “If you’re not there, I’m going to be so angry. Don’t make me have a miserable evening.”

Trump is leading by a huge margin in the few preference polls taken in Nevada. But he also led in polls ahead of the leadoff Iowa caucuses, only to finish second behind Cruz. Because Nevada’s caucus model demands more of a time commitment from voters and takes place on a Tuesday night, Cruz and Rubio hope that what they feel is a superior ground game will pay off against Trump.

Trump’s efforts to build a get-out-the-vote effort in Nevada don’t appear to match those put together by his main rivals. The real estate mogul’s Nevada operation is based at two offices opened late last year. Only one state lawmaker has endorsed him. Trump has made several trips to the state, drawing crowds thousands-strong at campaign rallies, and is relying on a groundswell of working-class Nevadans who don’t run in the usual political circles to propel him to victory.

In the days leading up to the caucuses, Rubio’s campaign office in Las Vegas buzzed with activity. The campaign has been phoning voters, knocking on doors and organizing caucus training sessions for months in a state where he freshman senator from Florida spent several years of his childhood.

Rubio is trying to set himself up as the candidate of the party establishment after former Florida Gov. Jeb Bush quit the race after a disappointing fourth-place finish in South Carolina. Establishment heavyweights have moved to back Rubio, with many saying they see the Florida senator as the candidate who can unite a disharmonious Republican Party. Since Friday, Rubio has added 12 new Congressional or gubernatorial endorsements, while Trump and Cruz have added none.

Cruz’s campaign showed signs of struggle following his third-place finish in South Carolina. The Texas senatorz faces a critical test on March 1, or Super Tuesday, when primaries are held in multiple states, including his home state of Texas and other southern states.

Cruz told reporters Monday that he had asked his campaign spokesman, Rick Tyler, to resign for tweeting a story that falsely alleged Rubio had insulted the Bible.

“We are not a campaign that is going to question the faith of another candidate for president,” Cruz said.

Cruz’s campaign has repeatedly been accused by rivals of using questionable tactics.

“It’s every single day something comes out of the Cruz campaign that’s deceptive and untrue, and in this case goes after my faith,” Rubio told reporters during a campaign stop in Elko, Nevada.

Trump also lashed out at Cruz at Monday night’s rally in Las Vegas, telling the crowd, “This guy is sick. There’s something wrong with this guy.”

Ohio Gov. John Kasich showed no signs of quitting the race, frustrating efforts by party leaders to coalesce around an anti-Trump alternative. Kasich is hoping to make an impact later in March when Ohio and other Midwestern states hold their primaries.

Trump heads into the Nevada caucuses with 67 delegates. His closest opponents, Cruz and Rubio, have a total of 11 and 10, respectively. It takes 1,237 delegates to capture the nomination at the convention.

In the Democratic race, Hillary Clinton took the lead in the competition for delegates after winning Saturday’s caucuses in Nevada. She now has a total of 52 caucus and primary delegates out of the 2,383 needed to win the nomination at the Democratic national convention. Her main rival, Vermont Sen. Bernie Sanders has 51.

The former secretary of state is expected to pad her lead with a victory in Saturday’s Democratic primary in South Carolina, where polls show her enjoying strong support among African-Americans. That bodes well for her prospects in primaries in several southern states on Super Tuesday where blacks make up a large part of the Democratic electorate.

Sanders, a self-declared democratic socialist, vowed to fight on, saying that he has no plans of leaving the race anytime soon. He says his campaign has plenty of time to make up lost ground.

“This is about a slog, state by state by state,” he said. He held a rally Monday in Massachusetts, one of the Super Tuesday primary states where he is running strongest.

READ: Donald Trump’s favorite excuse? It was just a ‘retweet’