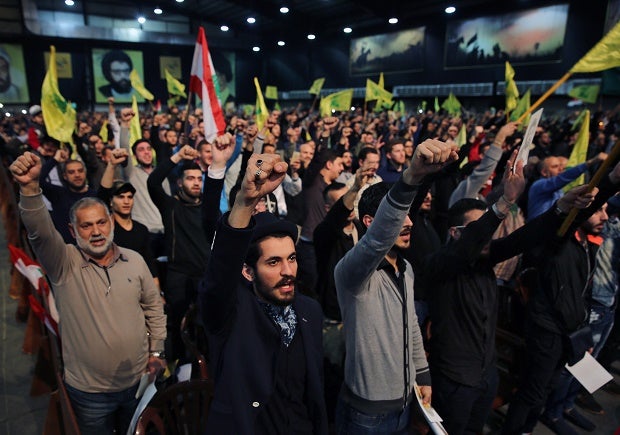 Hezbollah supporters cheer as they listen to a speech by Hezbollah leader Sayyed Hassan Nasrallah, during a ceremony honoring Hezbollah leaders, in the southern suburbs of Beirut, Lebanon, Tuesday, Feb. 16, 2016. Nasrallah said Turkey and Saudi Arabia are using the ISIS group as a “pretext” to launch a ground operation in Syria. AP Photo

RIYADH, Saudi Arabia—Saudi Arabia on Tuesday urged its citizens in Lebanon to leave, after Riyadh halted a $3 billion program funding military supplies to Beirut in response to “hostile” positions linked to Hezbollah.

Saudi ally and fellow Gulf Cooperation Council member the United Arab Emirates followed suit but went even further, banning its nationals from going to Lebanon and reducing its diplomatic representation there.

In Riyadh, the foreign ministry issued a statement calling on “all citizens not to travel to Lebanon, for their safety, and asking citizens residing in Lebanon or visiting not to stay unless extremely necessary,” the official SPA news agency reported.

Announcing the Saudi aid halt on Friday, an official said the kingdom had noticed “hostile Lebanese positions resulting from the stranglehold of Hezbollah on the state.”

Riyadh was making “a comprehensive review of its relations with the Lebanese republic,” the unnamed official said, cited by SPA.

Alleged leaders of the Lebanon-based Hezbollah are under sanction by Saudi Arabia.

The Shiite militant group is fighting in support of Syria’s regime and is backed by Saudi Arabia’s regional rival Iran, with whom relations have worsened this year.

Riyadh cut diplomatic ties with Tehran last month after demonstrators stormed its embassy and a consulate following the Saudi execution of a prominent Shiite cleric.

Syria’s war has exacerbated political rivalries within Lebanon, which has been without a president for almost two years because of fierce disagreements between Hezbollah and its rivals.

The Saudi official quoted on Friday said Lebanon had not joined condemnation of the attacks on its diplomatic missions in Iran, either at the Arab League or the Organisation of Islamic Cooperation.

The official also denounced “political and media campaigns inspired by Hezbollah against Saudi Arabia,” as well as the group’s “terrorist acts against Arab and Muslim nations.”

Hezbollah chief Hassan Nasrallah last week accused Turkey and Saudi Arabia of dragging the region into war and said “victory” was imminent for his group and its Syrian regime allies.

Saudi Arabia supports rebels opposed to Syria’s government, and says it is ready to send special forces under a US-led coalition to fight the Islamic State of Iraq and Syria group.

In a statement, Hezbollah said Saudi Arabia stopped the military aid because of economic pressures from the war in Yemen, where it leads an Arab military coalition fighting Iran-backed rebels, and lower oil revenues.

On Friday Saudi Arabia also stopped the remainder of a $1 billion financing package for Lebanese internal security forces, in a separate decision.

The $3 billion deal funded military equipment provided by France and was to ship vehicles, helicopters, drones, artillery and other equipment to Lebanon.