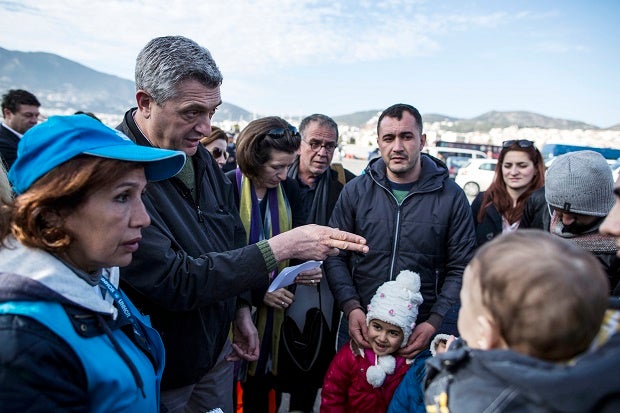 United Nations High Commissioner for Refugees Filippo Grandi, left, speaks with a Syrian family at the port of Mytilene during his visit on the northeastern Greek island of Lesbos, Tuesday, Feb. 23, 2016. Nearly 100,000 migrants and refugees have traveled to Greek islands from nearby Turkey so far this year. AP Photo

LESBOS, Greece—Border closures by European states alarmed by the migration crisis will cause “further chaos and confusion,” the new head of the UN refugee agency warned on Tuesday.

“I am very worried about the news that we are getting about increasing closures of European borders along the Balkans route because that will create further chaos and confusion,” UNHCR chief Filippo Grandi said during a visit to the Greek island of Lesbos.

Some 8,000 refugees and migrants have been trapped in Greece after Macedonia on Sunday barred passage to Afghans and introduced tougher document checks for Syrians and Iraqis.

READ: After 1 million migrants, Europe’s borders are back

This followed a decision by countries further up the migrant route to turn back groups of Afghans.

“It will increase the burden on Greece which is already shouldering a very big responsibility in managing these people and this is happening when we are not yet having alternatives,” Grandi said after visiting the Lesbos migrant registration point, or hotspot.

At a press conference later, he described the migrants as “old people… women with many children, families, clearly refugees… coming mostly from Syria.”

He had praise for the efforts of the authorities and residents of Lesbos to help the new arrivals, saying that “Europe has not shown much solidarity but here we see the best face of Europe.”

“We are very worried of closures happening with no corresponding openings where they should be,” he added, criticising “the tendancy to classify people along the route by nationality. Some are OK and can go through,” like Syrians while others are blocked like Afghans and Palestinians.

He said responsibility should be shared more broadly, and criteria should be applied “that are based on protection and not on nationality.”

He said takeup of an EU programme to relocate some 160,000 people from Greece and Italy to other member states was “too small” and another scheme to directly resettle refugees from Turkey “has not started yet.”

“So… to close the borders or to manage them tightly—to put it that way—in the absence of legal, safe alternatives for refugees will increase chaos and most likely will increase irregular movements that put people at risk,” the Italian diplomat said.

Lesbos is the main landing point for thousands of refugees and migrants who brave a perilous crossing from neighbouring Turkey in search of a better future in Europe.

More than 100,000 migrants and refugees have crossed the Mediterranean to Greece and Italy so far this year, and 413 have lost their lives trying, the International Organization for Migration said Tuesday.

Grandi said he will be presiding over a global conference on Syria at the end of March and he will be asking more countries to take in Syrian refugees, noting that he has had some “encouraging” responses from Latin America and Asia.