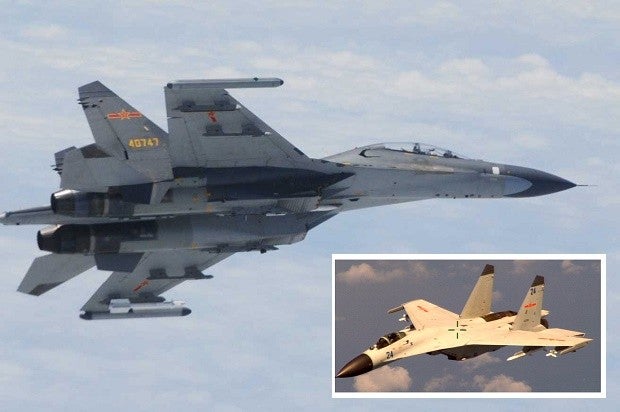 In this undated photo released by Japan Ministry of Defense, Chinese Shenyang J-11 fighter plane is shown. The J-11 is the Chinese version of the Russian SU-27 air superiority fighter. US officials have revealed that Beijing has deployed the plane and another warplane, the Xian JH-7 fighter-bomber, on Woody Island, a disputed isle in the Paracels. AP FILE PHOTOS

WASHINGTON, United States — China has deployed fighter jets to the same contested island in the South China Sea to which it also has sent surface-to-air missiles, US officials said Tuesday.

Navy Captain Darryn James, a spokesman for US Pacific Command, confirmed the report but noted that Chinese fighter jets have previously used the island.

Woody Island, which is also claimed by Taiwan and Vietnam, has had an operational airfield since the 1990s but it was upgraded last year to accommodate the J-11.

“We are still concerned that the Chinese continue to put advanced arms systems on this disputed territory,” James said.

The move was reported as US Secretary of State John Kerry hosted his Chinese counterpart, Foreign Minister Wang Yi, in Washington.

Last week, China confirmed it had placed “weapons” on Woody Island, defending what it said was its sovereign right to do so.

A US official told AFP that Beijing has deployed surface-to-air missiles on the island, apparently HQ-9s, which have a range of about 125 miles (200 kilometers.)

Wang had been scheduled to visit the Pentagon earlier Tuesday but the visit was canceled due to a “scheduling conflict,” officials said.

On Monday, the Washington-based Center for Strategic and International Studies released satellite imagery showing what appeared to be a high-frequency radar installation under construction on an artificial island on Cuarteron Reef in the Spratlys.

China’s land reclamation and military buildup in the South China Sea have drawn international condemnation and the United States has said it will continue to sail through waters claimed by Beijing.

Read Next
What are prospects for Syria ceasefire?
EDITORS' PICK
10 Filipinos positive for COVID-19 in UK, 7 in Ireland — envoy
Nograles: Cabinet members to donate 75% of monthly salary to aid COVID-19 fight
Quick chat with Nicole Andersson: ‘You really don’t need much to be happy’
IATF to LGUs: Issue ordinances vs attacks on frontliners, COVID-19 patients
Diokno to Duterte: OK to make fun of buck tooth, but focus on people’s needs first
Robredo spox thanks Duterte for defending VP’s efforts vs COVID-19
MOST READ
Coronavirus hotbed Rizal to shut borders on April 6
ADB warns PH against prolonged lockdown
Gov’t mulling quarantine period extension of 15-20 more days
Sotto on Isko Moreno’s call: We do our job without the media following our every move
Don't miss out on the latest news and information.