US offered RAMboys protection from arrest 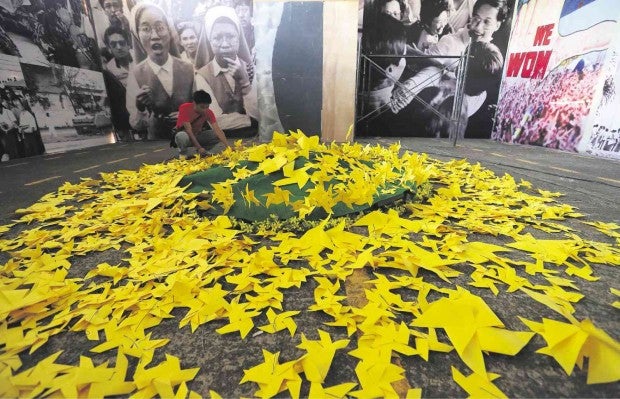 FLOWER POWER Yellow paper flowers are arranged at a hall of the People Power Experiential Museum in Quezon City showing photos of scenes during the mass uprising on Edsa that toppled the Marcos dictatorship. JOAN BONDOC

In our dealings with the Americans, we in the Reform the Armed Forces Movement (RAM) were careful not to prematurely divulge important facets of our plans even as Pentagon officials assiduously tried to keep up with our activities and plans.

To win our confidence, the Americans offered protection from arrest provided we refrained from employing violence in pursuit of our objectives.

During my detention after the 1987 coup attempt, I would receive calls from the US Embassy advising me to “hang on” until my release after nine months with no charges filed.

We saw no use, at any point, for American support of the material kind. All through that period, we were careful not to draw the Americans closer than necessary and were wary of giving them too much information.

But a number of high-level organizations visited the Philippines ostensibly to assess the situation but also to know more about the RAM.

We agreed to meet these groups and our message was consistent. When queried about the kind of help we needed, we would simply present our reformist position, which was nonviolent, and only asked that they understand our motivations.

These visitors included senior members of Asia Society, Hudson Institute, representatives and senators from the US Congress and even a bipartisan group composed of both Democrats and Republicans. The situation in the Philippines was such that it attracted worldwide interest, with the Americans foremost in the effort.

The eminent Ray Cline, former head of the Central Intelligence Agency (CIA), arrived with a full staff, and talked to the RAM leaders (or core group as the foreign press is wont to refer to us) in the presence of then Secretary of National Defense Juan Ponce Enrile.

CIA officials with Cline presented, among other things, a comprehensive briefing on China, which featured satellite photos of military installations near the Kalayaan Island Group. As early as then, the United States was already monitoring Chinese activities in the South China Sea.

Bearded and stocky, Cline was known among intelligence cognoscenti for his theory, published many years before the fall of the Berlin Wall, that post-Cold War alignments among countries would tend to behave like mobile tectonic plates, with the broad East-West divide breaking down into smaller groupings.

A minor surprise in that meeting was the presence, at his side, of a once popular character involved in the search for the Marcos gold—retired US Army Maj. Gen. John Kirk Singlaub.

A Senate blue ribbon committee investigated allegations that Manglapus hired Terrel to assassinate RAM leaders. The irrepressible and peripatetic Linggoy Alcuaz released copies of taped conversations between Manglapus and Terrel, apparently recorded by Terrel himself at the residence of Manglapus.

The tapes sounded authentic, with barking dogs in the background and occasional distant voices. The proceedings, of course, have become part of the congressional record. With the present technology on voice print analysis, certain hard conclusions could have been arrived at.

A journalist friend, the late John Macbeth, submitted the transcript of an interview with  Terrel to the committee chair, Sen. Ernie Maceda.

Macbeth’s article, published in Far Eastern Economic Review, quoted Terrel as declaring why he refused to carry out the mission to lure RAM leaders into an ambush.

“They are all decent sorts,” Terrel is said to have averred. “They have leadership and charisma and love their country,” contrary to what Manglapus had led him to believe.

A few weeks before the Senate investigations, Terrel visited me at the Naval District in Legazpi City. The flamboyant son of Gov. Luis Villafuerte had him escorted by squads of soldiers in full battle gear and riding in an armored personnel carrier and military patrol vehicles.

Terrel and the young Villafuerte cut a glamorous swath through our modest camp. Over cups of coffee, they invited me to join an open water dive exploring sunken wrecks the following day.

Propitiously, a local fortune-teller had earlier advised me to avoid three activities:  flying, diving and going to the firing range. I am not exactly the superstitious type but, all things considered, I chose to be circumspect and politely asked for a rain check.

Terrel also proposed for me to invite Gringo Honasan, Red Kapunan and other RAM leaders over for a get-together. He was an excellent raconteur and regaled us with his colorful exploits in many troubled countries.

Only when Alcuaz produced the tapes that I looked at that episode with Terrel in a different light.

By the way, my favorite part of the tapes was where Manglapus, in going over Terrel’s list of targets, prompted him to include me. “What about Robles?” he asked. “Don’t forget him.”

Maceda promised to produce a committee report in a month’s time. As far as I could determine, he never did.

A Filipino journalist, Luis Francia, working for a New York publication, sought me out in Zamboanga City where I had been subsequently reassigned. Apparently, he had information that Manglapus and Terrel knew each other in New York during the former’s “steak commando” days.

The caper was said to have been instigated by the Aquino family and their patriarch, Don Pedro, as an antidote to the bothersome RAM efforts to unseat President Cory Aquino.

I had absolutely nothing to say about those bits of bizarre  information.

In addition to what he wrote for the New York weekly magazine, Francia published an article in a local newsmagazine based on his interview with me.

To my amusement, he quoted a throwaway line on the idea of hiring a foreign mercenary to finish off the RAM leadership.

“It’s this import mentality,” he quoted me as complaining. “What’s wrong with the local talent?” What’s more, Filipino assassins wouldn’t have the “moral scruples” that seemed to have held Terrel back.

America’s influence extends beyond being a source of hired assassins or providing CIA assessments to defense officials. While I cannot yet reveal my sources, which are as impeccable as can be, let me share two more stories on the extent of American interests in the Philippines.

The first is a letter to Marcos from top-level sources in the US government handed to Arturo Aruiza in Hawaii during the Marcos family stay there.

The letter involved the Marcos gold and referred to him by a code name, “Ulysses.”

What may be gleaned from the note is that there exists a longstanding relationship between Marcos and the US government, which acknowledged the existence of the treasure as well as reviewed the status of efforts by the Americans to participate in its “recovery.”

The second is another letter, this time signed by the chair of the joint chiefs of staff of the US military, sent in utmost confidence to a prominent personality with direct access to the Cory Aquino government.

The offer is mind-boggling when you consider how much of the annual budget could then be made available for national development and for other useful purposes.

The conditions set by the United States is that it should not be known as the source of such proposal and that it should appear as an entirely Philippine initiative. Any attempt to connect the idea to the Americans would be met with strong denials.

Unfortunately, the concept was laughed off the table at all planning levels, while the proponents could not overcome the credibility problem caused by the apparent audacity and presumption of the offer.

Many believed that the Americans would not even begin to consider a discussion of the matter. Such feelings of unworthiness seem to be entrenched in our psyche.

“We respect and learn from the past but must always focus on building the future.”

Perhaps the question is not whether Edsa can happen again but, whether we can improve on what we have so far accomplished and, for better or for worse (like it or not), we move forward with the Americans always in mind.

Read Next
‘We were ready to die’
EDITORS' PICK
Chinese province, cities ban long-distance buses over virus concerns
‘A greener, cleaner tomorrow’: A how-to guide for Filipinos who want to help with today’s energy crisis
Turkey hunts for earthquake survivors as death toll hits 31
SM continues to send relief assistance to remote towns in Batangas
Get exciting deals and discounts when you download the new McDonald’s App
Classes in Batangas still suspended despite lower Taal alert status
MOST READ
Slain maid’s kin reject P59-M blood money
Parts of Aurora Blvd. closed for one week
Hunt on for ‘defecating’ man in Intramuros – Manila City officials
Flight readied for Japanese to come home from Wuhan
Don't miss out on the latest news and information.