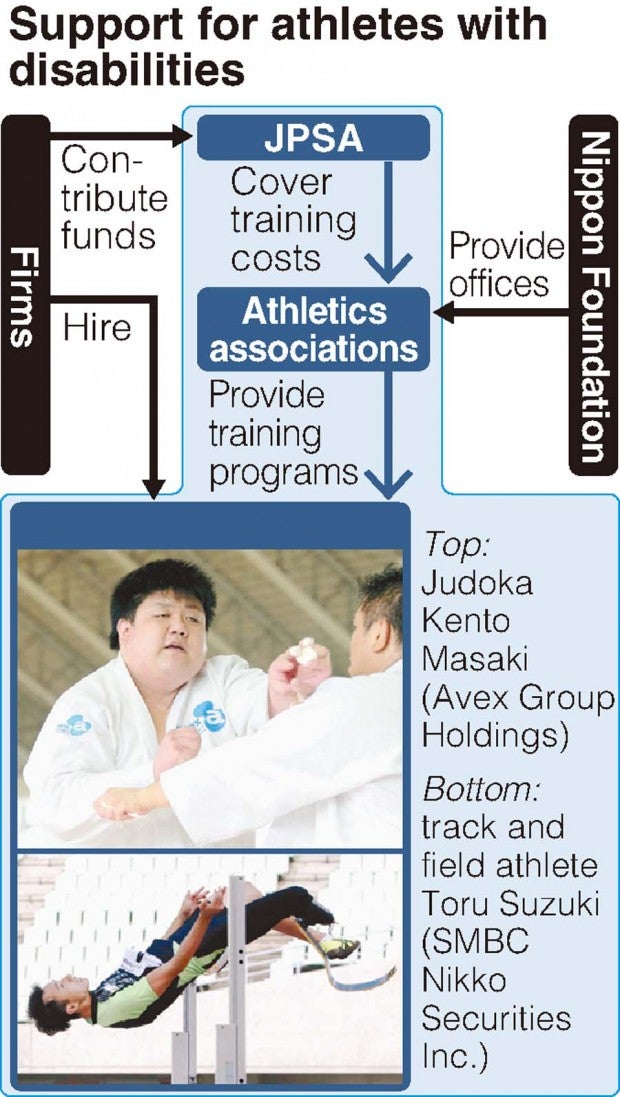 TOKYO—More companies in Japan are hiring differently-abled athletes as interest in the 2020 Tokyo Paralympics rises. Companies supporting the Japanese Para-Sports Association (JPSA), based in Tokyo, have doubled in number over the past five years. However, the financial situations of many sports organizations for disabled athletes remain difficult and they are in need of further support.

Appraisals based on sports

One-legged high jumper Toru Suzuki, 35, is pleased with his new improved training environment at Tokyo-based SMBC Nikko Securities Inc., where he has been an employee since last July. “I can now focus on training for the Rio Games,” he said, smiling.

Suzuki, who has competed in the four most recent Paralympic Games, experienced tough times when he had to cover his competition travel expenses with money earned through part-time work. His current employer provides about 1.5 million yen per year, in addition to his salary, to cover his expenses to participate in competitions, and he is only required to come to the office once a month. As a result, he was able to take part in 15 competitions in 2015, the most he has done in a year.

Visually impaired judoka Kento Masaki, 28, a gold medalist at the London Paralympics, is one of 10 athletes who are employed by Avex Group Holdings, a major music industry company, based in Tokyo. Avex considers its employees’ athletic activities part of its business and conducts employee appraisals that take into account factors such as their performance in sports competitions and their number of mentions in the media.

According to Tsunahiro World Co., a Tokyo-based staffing agency specializing in athletes with disabilities, the number of companies that hired disabled athletes through the agency has increased tenfold — from two in 2012, with 4 new hires, to 20 in 2015, with 34 new hires.

According to the Japanese Olympic Committee (JOC), “Athnavi,” a support system for job-seeking athletes, has become more widely used and has enabled 11 disabled athletes to find jobs successfully since July 2013. The platform receives five to 10 inquiries each month from firms seeking to hire new individuals.

Under the law aimed at promoting employment of disabled people, companies are required to ensure that two percent or more of their workforce consists of disabled employees. A JOC official said, “Hiring athletes with disabilities is an appealing option for companies.” 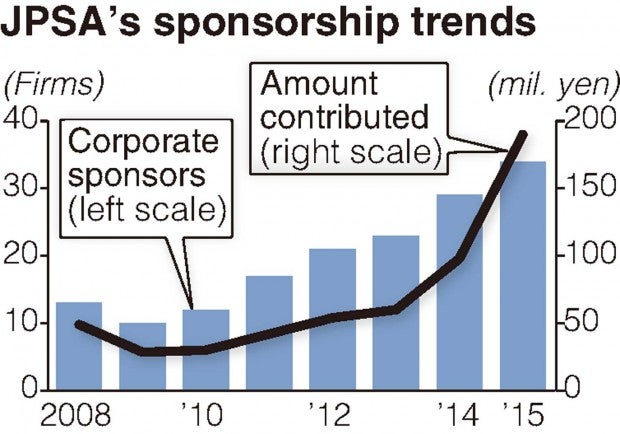 Meanwhile, sports organizations around Japan find themselves balancing on a weak financial footing.

Hisako Yoshida uses part of her Tokyo home as the office of the Japanese Para-Powerlifting Federation (JPPF), for which she serves as the executive director. In addition to doing almost all the administrative work, Yoshida has to try to find a venue that can be used for free each time the JPPF holds its nationwide competition.

Kunio Nakamori, a senior official at JPSA, said: “We are starting to see gradual improvements in the operating environments of sports organizations, but they are still not enough. We urgently need to build a system under which they can operate as regular businesses to help achieve better results at sports competitions.”

According to the JPSA, it had 17 corporate sponsors in 2011, with their financial contributions totaling 42 million yen. That number doubled to 34 sponsors in 2015, with the amount totaling 190 million yen. Of them, 21 were official sponsors. The JPSA had previously set a goal to have 18 sponsors as of 2030, and had already met that target as of 2015.

Since 2014, the JPSA has been using its financial resources to recruit new athletes through a fresh initiative and to host more sports competitions than before.