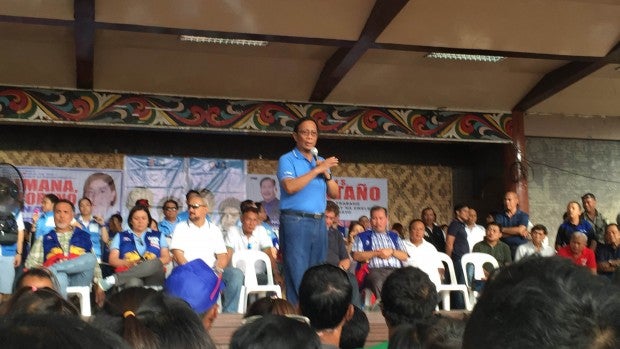 During his campaign rally at the plaza here, Binay said he would not be like one of the presidential candidates who was inefficient in every secretary post he got in government, obviously referring to Roxas, who had been appointed Trade, Transportation, and Interior secretary in three administrations.

Binay cited the breakdowns besetting the Metro Rail Transit (MRT-3) and alleged corruption during the stint of Roxas as secretary.

Binay also scored another presidentiable for being an “on-the-job” candidate, referring to Sen. Grace Poe, who was a newly elected senator in 2013 after her short stint at the Movie and Television Review and Classification Board and is now vying for the presidency.

Binay criticized his opponents a day after the Comelec presidential debates in Cagayan De Oro city, when he blasted the administration’s inefficiency in delivering social services to the poor.

Binay also criticized the administration’s failure to address the power crisis in Mindanao, particularly referring to its failure to utilize the hydropower potential of the Maria Cristina falls in Iligan.

“Tuloy-tuloy pa rin ang brownout! Ilang taon na, nasaan ang namumuno? For every problem, there is a solution. There is no solution, because we have a bad leader, a bad administration,” he added.

Mindanao is heavily reliant on hydropower, and is constantly plagued with power shortage, especially during summer, when the water supply is low.