CAGAYAN DE ORO CITY—They came to pitch their message and slug it out with each other—they did well there—but their answers to questions about their vulnerabilities would be remembered most after the debate.

Sunday night’s opening presidential debate at Capitol University in Cagayan de Oro City was the first national debate organized by the Commission on Elections (Comelec) in 24 years, in cooperation with GMA 7 and the Philippine Daily Inquirer, to shift attention to policy talk in a country where many have been fascinated by personalities and show biz-like campaigns.

To be sure, Vice President Jejomar Binay, Sen. Miriam Defensor-Santiago, Davao City Mayor Rodrigo Duterte, Sen. Grace Poe and former Interior Secretary Mar Roxas were ready for the criticisms, though some of them grappled with the knocks on their candidacies.

Binay faced the question about how he amassed wealth while in public office, squarely saying some of his wealth were passed on to him by his parents.

Santiago snapped back at debate host Jessica Soho when she read the question about her health.

“That’s my right,” Santiago replied, explaining that illnesses fluctuate and that it is her right to choose to run for President.

Asked about her absences in the Senate, Santiago shot back that she was suffering from stage 4 cancer.

“I waited to die, but my guardian angel did not let me die,” she said.

Instead of arguing with Santiago, Duterte came to her support.

“I will not go into a debate with Ma’am Miriam. I do not see Senator Santiago passing away in the next 20 years so there is no problem,” he said.

An amused Santiago replied: “I do not want to spend the next six years lying in bed feeling sorry for myself … I felt sorry for my country. Because graft and corruption is endemic. Nobody did much except Mayor Rody Duterte.”

Duterte beamed and raised his right hand as the audience applauded him and Santiago.

Asked about his foul mouth, reputation as a womanizer and human rights record, Duterte said he would continue to kill criminals.

He denied allegations of extrajudicial killings, but said that if elected President, he would use the law to go after illegal drugs and criminals.

“We will order the killing of all criminals,” he said.

Asked about the thinness of her resumé, Poe, a freshman senator, replied, “There is no proof that you will do better because you have been in office longer.”

Roxas said the presidency was not “OJT,” or on-the-job-training.

Roxas, who had wooed Poe to become his running mate, said there was a “right time for everything, especially since a President is responsible for the lives of 100 million Filipinos.

He also defended himself against criticism about his absence during Supertyphoon “Yolanda” (international name: Haiyan), insisting he was there before, during and after the world’s worst storm. 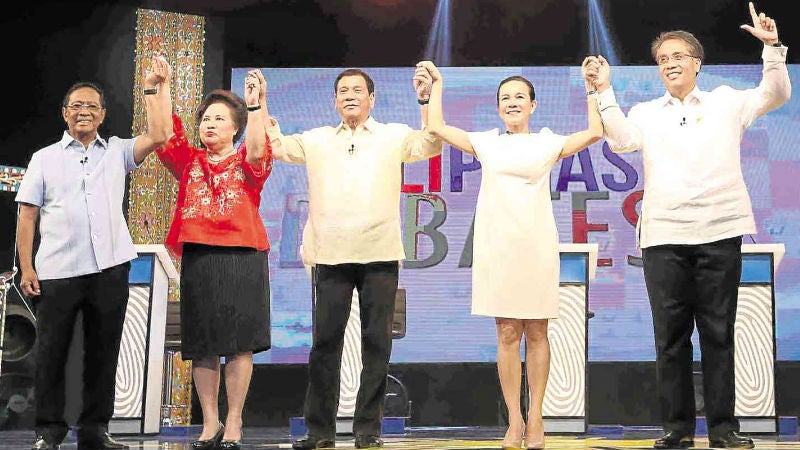 Poe said that while Roxas had experience with three administrations, she herself had investigated numerous irregularities involving her rival’s former agencies.

“I don’t need extensive experience to understand our transportation problems,” she said.

Binay opened the debate by declaring that poverty was the main problem of the country, that he shared the suffering of the poor because he used to be one of them, and that he was successful in reducing poverty in Makati City when he took over as mayor 30 years ago.

Binay said his and his family’s reputations were tarnished by his political enemies.

Santiago also zeroed in on poverty as the biggest problem of the country, blaming it on “people who want the money of the government.”

Duterte started by coming out in the open about his admiration for Santiago, describing her as “one of only two persons qualified to run this country.”

Poe went micro in her opening spiel as she cited the importance of Mindanao in the production of pineapple, banana, coconut and corn for both the domestic and export markets.

She promised to allocate a third of the national budget to Mindanao if   elected President.

It was Roxas, however, who threw the first punch right out of the starting gate.

“I have simple question with a simple answer. Who will you choose as your daily driver to entrust your child: Is it someone with a case of corruption, a hot-head who is prone to accidents, or someone who is just learning to drive? Or will you choose someone you have known for a long time, someone who has never taken advantage of you, and someone who comes with a good recommendation from a former employer,” Roxas said in a bid to set an antagonistic tone to the face-off.

The five candidates were confronted head on with the burning issues against them.

Binay was asked about his assets, liabilities and net worth, specifically how much of his properties were obtained through inheritance or through their income and whether these were obtained before or after he became mayor.

“[Three decades] is a long time. Some assets I inherited [from both my father and mother] before I got my position in 1986. Some I bought, It doesn’t mean that if you’re in government, you don’t have the means to buy. I practiced law and my wife practiced medicine. And it’s not true that we have a lot of land,” Binay said.

Santiago, who was surprisingly tame for the good part of the debate, nearly went ballistic when Binay turned the tables on her when the question about political dynasties came up.

“Miriam has a son who was also elected,” Binay said in his rebuttal to the question thrown at him about members of his family holding public offices.

Santiago immediately turned to Binay and looked daggers at him.

Asked by debate host and GMA 7 Mike Enriquez if she wanted to respond, Santiago said: “What he said was wrong. My son ran for a party-list but did not run for another post after one term.”

Binay, whose wife and three children were elected to different offices, defended his position on the issue, saying while the Constitution barred it, no law had passed defining political dynasty.

He said it was wrong to prevent qualified people to run for public office just because they have relatives in the government.

But Santiago, a former judge who was also elected to the International Criminal Court, said the constitutional provision on political dynasty was enough.

“It’s a basic principle of constitutional law that anything written in the Constitution … should be literally applied if possible,” she said. “The Constitution is always and always supreme.”

On peace in Mindanao, Poe said she would push for a transparent, inclusive and sustainable discussions in forming a new agreement.

“We should follow this up with projects in Mindanao to sustain its development,” she said, adding that powers should be devolved to give Moro leaders more autonomy.

Duterte said he would push for federalism as an alternative, especially for the people in the western side of Mindanao led by Moro National Liberation Front founder Nur Misuari.

Binay’s closing remarks hammered on the Aquino administration’s underspending and its adverse impact on infrastructure and social services without answering directly the main question: Why should he be elected President.

Santiago said the voters themselves had the responsibility to choose the next leader based on three criteria: He or she should have academic excellence, professional excellence and moral excellence or no record of corruption.

Duterte said he was running for President because he was tired of complaints about rising corruption, criminality and illegal drugs, all of which he promised to wipe out in three to six months.

Poe pressed her spiel about giving Mindanao a bigger share of the budget and said her first act as President was to push for the enactment of the freedom of information bill.

She sought to ease worries about her lack of experience, saying there were more experienced leaders who continued to employ worn-out solutions to the country’s persistent problems.

Roxas ended the debate with a swipe at his rivals. “Why do I want to be President? Because I want your life to be like mine, free from hunger, free from poverty, and free to dream,” he said. With a report from AP