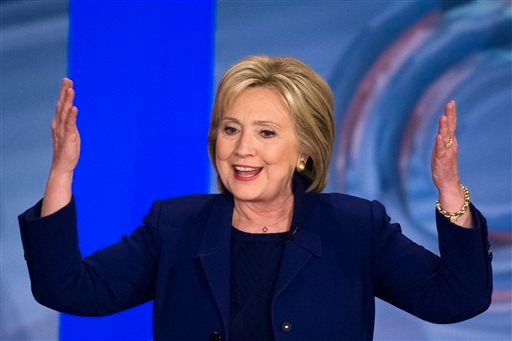 The two main US political parties parted ways for the third stage of the surprise-filled race for the White House, with the Democrats heading west and the Republicans campaigning in the south.

In Nevada, CNN, Fox News and NBC News called the contest for the former secretary of state. With roughly two-thirds of precincts reporting, Clinton was at 52.2 percent to 47.7 percent for Sanders.

“To everyone who turned out in every corner of Nevada with determination and heart: This is your win. Thank you,” Clinton tweeted.

Voters meanwhile streamed to the polls in South Carolina, in what could be an important test of strength for the 69-year-old frontrunner Trump. Voting places were to close at 7:00 pm (0000 GMT Sunday).

In the desert state of Nevada, both Clinton and Sanders worked hard to reach out to the African-Americans, Hispanics and Asian-Americans who make up roughly half of the state’s population.

Clinton, who won by a hair in Iowa but was crushed by Sanders in New Hampshire, was counting on a major Hispanic voter turnout, especially among Las Vegas hotel and casino employees.

Nevada has some three million residents, and the population is overwhelmingly concentrated in two large urban centers, Las Vegas and Reno.

The former top US diplomat needed a win in Nevada, a state once seen as a relatively easy victory for her — but one where Sanders gathered steam after trouncing Clinton in New Hampshire on February 9.

Clinton won their first showdown in Iowa on February 1, but only by a razor-thin margin.

Since Wednesday, the 68-year-old Clinton has visited staff at casinos in Las Vegas, where workers “caucused” right on the famous Strip.

“I need your help this morning — in the show room, 11 am,” she told employees at Harrah’s on Saturday, less than an hour before caucus time. Sanders visited the same casino cafeteria about 20 minutes earlier.

Clinton says she is the natural ally of Latinos on immigration, and if elected she promises a quick path to citizenship for those in the country illegally.

The former first lady and senator from New York has relentlessly attacked Sanders for voting against immigration reform in 2007.

Sanders counters that the measure gave little protection for foreign “guest workers,” and that he voted for a 2013 immigration reform bill that died due to Republican opposition.

Clinton claims that Sanders is offering impractical, pie-in-the-sky ideas that he cannot bring to fruition as president.

In South Carolina, pre-vote polls showed the billionaire businessman Trump with a lead over his five Republican rivals, although his advantage had shrunk in one poll in the lead-up to Saturday’s primary in the Palmetto State.

Lynn Derrick, a regional vice president for Oracle Corporation and a first-time primary voter, said he had cast his ballot for Trump.

“I want to put somebody in the White House who has a business background,” Derrick told AFP at a high school in the state capital Columbia.

“We just think we want to take a risk with Trump. We think he’s had success with everything he’s touched.”

Trump is banking on a big symbolic win ahead of “Super Tuesday” on March 1, when about a dozen states will go to the polls to choose candidates for the November 8 presidential election, with a quarter of the nominating delegates up for grabs.

He finished second to Texas Senator Ted Cruz in Iowa on February 1, but secured a commanding win in New Hampshire one week later. The two have duked it out in the past week, with the campaign growing increasingly nasty.

On the eve of the primary, Trump led with about 28 percent of likely Republicans voters backing him, according to an NBC-Wall Street Journal poll.

Rubio and Bush are under intense pressure to fare well Saturday, as are Ohio Governor John Kasich and retired neurosurgeon Ben Carson, whose campaigns have struggled.

Edwin Pearlstine, a retired beer distributor and brewery owner who said he voted for Kasich even while conceding he had little chance of winning, said if Trump wins the Republican nomination, he’ll leave the country.

“I got a pretty place right on the beach in the Bahamas. I’ll just go stay there,” he said.