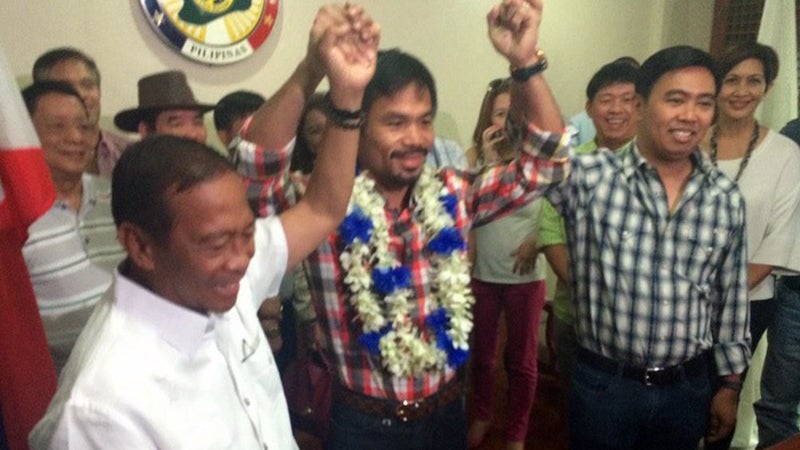 The United Nationalist Alliance (UNA) is standing by their party mate, boxing legend and Saranggani Rep. Manny Paquiao, but pledged to uphold the rights of the LGBT (lesbian, gay, bisexual and transgender) community.

As he faced a barrage of condemnation for his remarks against homosexual relationships, UNA president Toby Tiangco told reporters yesterday the party would stay behind Pacquiao.

“First of all, he has already apologized and if he Congressman Pacquiao has done wrong, perhaps as party mates, as friends, we have to embrace him all the more and talk about this issue,” Tiangco told reporters yesterday, reiterating a statement earlier made by UNA standard bearer Jejomar Binay.

“It’s not right that just because he did something wrong, we will leave him behind,” said the Navotas representative.

Tiangco said he has spoken with Pacquiao after the controversy. He said UNA, as a party, would continue to uphold LGBT rights.

Paquiao got the ire of the LGBT community in the Philippines and overseas for his remarks.

Asked about calls for UNA to let go of Pacquiao, UNA standard-bearer Vice President Jejomar Binay said: “No. He has already apologized.”

“It was more of a friendly talk. He said it was wrong for him to make that comparison… We will ensure that the rights of the LGBT sector will be protected,” he said.

Pacquiao also has to parry calls to disqualify him from the senatorial race on account of his upcoming fight with American boxer Timothy Bradley on April 9, exactly a month before polling day.

Former Akbayan Rep. Walden Bello, also a senatorial candidate, made the call on Thursday, citing global publicity that Pacquiao would receive because of the fight at the height of campaign season.

But election lawyer Romulo Macalintal said the Pacquiao-Bradley bout may not be cited as a ground for disqualification.