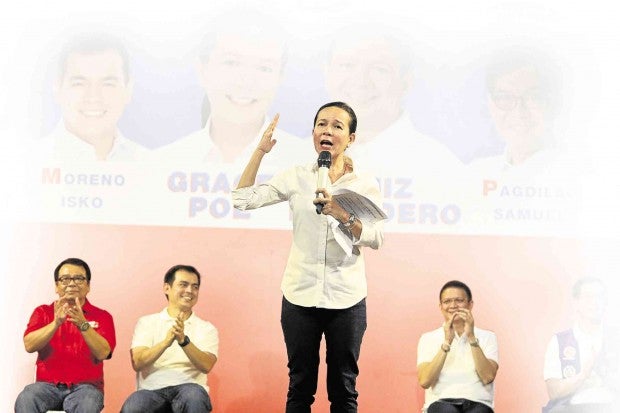 ILOILO CITY—The camp of Senators Grace Poe and Francis “Chiz” Escudero has debunked claims by the ruling Liberal Party (LP) that Iloilo and other Visayas areas are bailiwicks of Mar Roxas and other administration candidates.

The tandem of Poe and Escudero is being supported by Iloilo Vice Gov. Raul “Boboy” Tupas, a scion of the Tupas clan, one of Iloilo’s dominant political families and strong allies of President Aquino in LP.

Raul bolted LP and became the provincial chair of the Nationalist People’s Coalition after the ruling party chose Angeli Lee-Tupas, the wife and chief of staff of Raul’s elder brother, Iloilo Rep. Niel Tupas Jr., as official LP candidate for congressman over Raul.

Niel is serving his third and last term as representative of Iloilo’s fifth congressional district.

Angeli’s bid is being challenged by Raul, who now supports Poe and Escudero.

Raul joined Poe and Escudero in a rally in Carles town in Iloilo on Tuesday which was attended by thousands of residents.

Raul was also with Poe, Escudero and their senatorial slate at a forum at University of Iloilo in Iloilo City where thousands of students mobbed the candidates.

“Senator Drilon does not own the votes of Ilonggos and he also does not own Iloilo,” said Escudero, referring to Senate President Franklin Drilon, a native of Iloilo province.

Drilon earlier proclaimed Iloilo and the rest of Western Visayas as the bailiwick of the administration and LP mainly because Roxas is a native of Capiz province.

LP national candidates launched their campaign in Roxas City in Capiz and in Iloio City on Feb. 9, drawing about 30,000 supporters in the two cities.

Escudero said he believed that every voter and Filipino would exercise his or her right to choose come voting time.

Poe said Drilon should be reminded that he drew the support of Ilonggos simply because he is from Iloilo.

Alluding to her Iloilo roots, Poe said that during her campaign sorties, her supporters have told her: “You’re one of us.”

Poe was abandoned and later found in the baptismal font of Jaro Cathedral in Iloilo City in 1968. She was later adopted by celebrity couple Fernando Poe Jr. and Susan Roces. Roces was born in Bacolod City in Negros Occidental.

While acknowledging LP’s edge in the Visayas, the Partido Galing at Puso coalition expects Poe to garner a significant number of votes enough to reach at least 40 million to win the presidency, said Cebu Rep. Joseph “Ace” Durano, the coalition’s national campaign manager.