Pope vs. Trump: ‘Not Christian’ to only build border walls 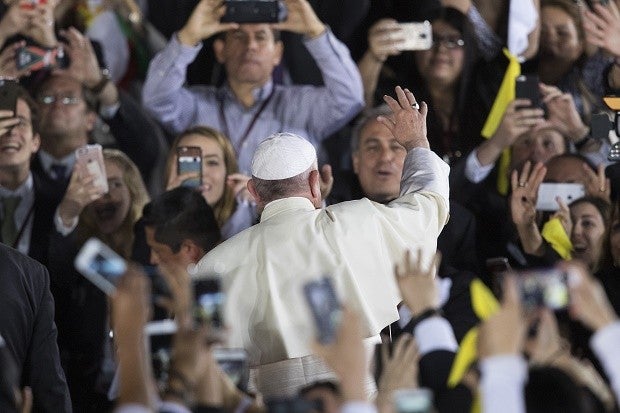 Pope Francis waves goodbye before his departure at the Abraham Gonzalez International Airport in Ciudad Juarez, Mexico, Wednesday, Feb. 17, 2016. Francis returned to Italy after a five-day visit in Mexico. His plane took off from the border city of Ciudad Juarez after night fell Wednesday. AP

ABOARD THE PAPAL PLANE — Thrusting himself into the heated American presidential campaign, Pope Francis declared Thursday that Donald Trump is “not Christian” if he wants to address illegal immigration only by building a wall along the US-Mexico border.

Trump fired back ferociously, saying it was “disgraceful” for a religious leader to question a person’s faith.

The rare back-and-forth between pontiff and presidential candidate was the latest astonishing development in an American election already roiled by Trump’s free-wheeling rhetoric and controversial policy proposals, particularly on immigration. It also underscored the popular pope’s willingness to needle US politicians on hot-button issues.

Francis’ comments came hours after he concluded a visit to Mexico, where he prayed at the border for people who died trying to reach the US While speaking to reporters on the papal plane, he was asked what he thought of Trump’s campaign pledge to build a wall along the entire length of the border and expel millions of people in the US illegally.

“A person who thinks only about building walls, wherever they may be, and not building bridges, is not Christian,” he said. While Francis said he would “give the benefit of the doubt” because he had not heard Trump’s border plans independently, he added, “I say only that this man is not a Christian if he has said things like that.”

Trump, a Presbyterian and the front-runner for the Republican presidential nomination, responded within minutes.

“For a religious leader to question a person’s faith is disgraceful,” he said at a campaign stop in South Carolina, which holds a key primary on Saturday. “I am proud to be a Christian, and as president I will not allow Christianity to be consistently attacked and weakened.”

Trump also raised the prospect of the Islamic State extremist group attacking the Vatican, saying that if that happened, “the pope would have only wished and prayed that Donald Trump would have been president because this would not have happened.”

Francis, the first pope from Latin America, urged Congress during his visit to Washington last year to respond to immigrants “in a way which is always humane, just and fraternal.” He irked Republicans on the same trip with his forceful call for international action to address climate change.

Immigration is among the most contentious issues in American politics. Republicans have moved toward hardline positions that emphasize law enforcement and border security, blocking comprehensive legislation in 2013 that would have included a path to citizenship for many of the 11 million people in the US illegally.

Hispanics, an increasingly large voting bloc in US presidential elections, have flocked to Democrats in recent years. President Barack Obama won more than 70 percent in the 2012 election, leading some Republican leaders to conclude the party must increase its appeal to them.

However, the current GOP presidential primary has been dominated by increasingly tough rhetoric. Trump has insisted that Mexico will pay for his proposed border wall and has said some Mexicans entering the US illegally are murderers and rapists.

While Trump’s words have been among the most inflammatory, some of his rivals have staked out similar enforcement positions. Texas Sen. Ted Cruz and retired neurosurgeon Ben Carson are among those who have explicitly called for construction of a wall.

Former Florida Gov. Jeb Bush, one of the few GOP candidates proposing a path to legal status for people already in the US illegally, said Thursday he supports “walls and fencing where it’s appropriate.” Bush said that while he gets his guidance “as a Catholic” from the pope, he doesn’t take his cues from Francis on “economic or environmental policy.”

Marco Rubio, another Catholic seeking the GOP nomination, said that Vatican City has a right to control its borders and so does the United States.

Rubio said he has “tremendous respect and admiration” for the pope, but he added, “There’s no nation on Earth that’s more compassionate on immigration than we are.”

Cruz said he was steering clear of the dispute. “That’s between Donald and the pope,” he said. “I’m not going to get in the middle of them.”

The long-distance exchange between the pope and Trump came two days before the voting in South Carolina, a state where 78 percent of adults identify as Christian, according to the Pew Research Center’s 2014 US Religious Landscape Study. Of that group, 35 percent identify as evangelical and 10 percent as Catholic, the survey found.

It’s unclear what impact, if any, the pope’s rhetoric will have, here or in other states. An October poll conducted by The Associated Press-NORC Center for Public Affairs Research found that most Americans had no strong opinion on the pope’s approach to immigration issues, though he was overall viewed favorably.

Even before Thursday, Trump had been critical of Francis’ visit to Mexico. He said last week that the pope’s plans to pray at the border showed he was a political figure being exploited by the Mexican government.

READ: Immigration at center of Pope’s visit to Mexico-US border

Francis glossed over Trump’s assertion that he was a pawn of Mexico, telling reporters on his plane that he would “leave that up to your judgment.” But he seemed pleased to hear the candidate had called him a “political” figure, noting that Aristotle had described the human being as a “political animal.”