Pope suggests contraception can be condoned in Zika crisis 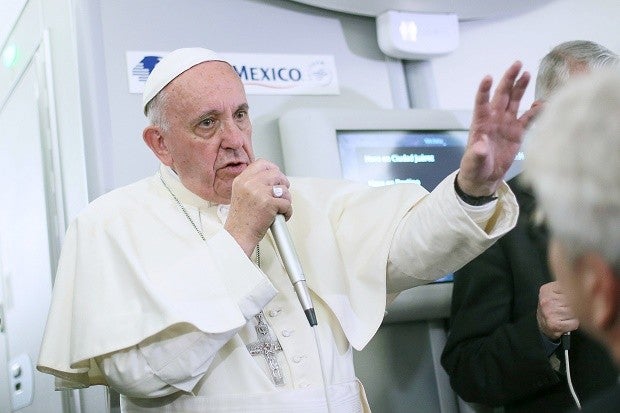 In this photo taken Wednesday, Feb. 17, 2016 Pope Francis meets journalists aboard the plane during the flight from Ciudad Juarez, Mexico to Rome, Italy. The pope has suggested that women threatened with the Zika virus could use artificial contraception but not abort their fetus, saying there’s a clear moral difference between aborting a fetus and preventing a pregnancy. AP

ABOARD THE PAPAL PLANE — Pope Francis has suggested women threatened with the Zika virus could use artificial contraception, saying “avoiding pregnancy is not an absolute evil” in light of the global epidemic.

The pope unequivocally rejected abortion as a response to the crisis in remarks Wednesday as he flew home after a five-day trip to Mexico.

But he drew a parallel to a decision by Pope Paul VI in the 1960s to approve giving nuns in Belgian Congo artificial contraception to prevent pregnancies because they were being systematically raped.

Abortion “is an evil in and of itself, but it is not a religious evil at its root, no? It’s a human evil,” Francis told reporters. “On the other hand, avoiding pregnancy is not an absolute evil. In certain cases, as in this one (Zika), such as the one I mentioned of Blessed Paul VI, it was clear.”

Francis was responding to a reporter’s question about whether abortion or birth control could be considered a “lesser evil” when confronting the Zika crisis in Brazil, where there has been a spike in babies born with abnormally small heads to Zika-infected mothers.

The World Health Organization has declared a worldwide health emergency over the Zika virus and its suspected link to birth defects. On Thursday, the UN agency advised the sexual partners of pregnant women to use condoms or abstain from sex if they live in or have visited Zika-affected areas, echoing a recommendation made by US health officials. The virus has been reported in at least 34 countries, most of them in overwhelmingly Catholic Latin America and the Caribbean, where access to birth control is often limited and abortion is heavily restricted.

Theologians and some Latin American bishops cautioned the pope was not giving a green light for Catholics to use artificial birth control, nor did his remarks amount to a change in church teaching.

But Francis’ comments suggest that Catholics under specific circumstances could make a “conscience-based decision about whether they should prevent pregnancy,” said the Rev. James Bretzke, a moral theologian at Boston College.

“Certainly Pope Francis should have anticipated a question on the church’s response to the Zika virus, and from his answer I believe he was well-prepared to field this query,” Bretzke said. “His comment on the Zika virus and measures to avoid pregnancy is within perfect consistency with the traditional moral teaching of the Catholic Church.”

UN officials have called on Latin American countries to loosen their abortion laws to allow women to terminate pregnancies if they fear the fetus may be at risk for microcephaly, a rare birth defect that causes brain damage and may be linked to the virus.

But Francis told reporters, “Taking one life to save another, that’s what the Mafia does. It’s a crime. It’s an absolute evil.”

On Thursday, Bishop Noel Antonio Londono of the Diocese of Jerico in the Colombian state of Antioquia, said nobody should interpret the pope’s remarks as free license to use birth control.

“This isn’t a blank check,” he said. “Undoubtedly, with regards to Zika, there are people who need to protect themselves.”

READ: DOH advice to women: Put off pregnancy due to Zika

Bishop Miguel Angel Cabello, of Concepcion, Paraguay, said it was too early to know exactly what Francis meant.

“We need more studies on the Zika virus and its consequences” before any decisions on church policy are made, he said. “The pope made a comment and we should take it as a comment.”

Francis has tended to downplay the fraught moral hand-wringing over sexual ethics that preoccupied his predecessors, John Paul II and Benedict XVI. He has said the church shouldn’t be “obsessed” with such issues.

Coming home from Africa last year, Francis dismissed a question about whether condoms could be used in the fight against AIDS, saying there were far more pressing issues in Africa, such as poverty and exploitation, and that only when those problems were resolved should questions about condoms and AIDS take center stage.

Angelica Rivas, of the Feminist Collective for Social Development in El Salvador, said the pope’s latest remarks would not be much help since the church in her country has consistently opposed sex education on the use of contraception, and birth control would not help the many women who are already pregnant.

“We have to give them the alternative of interrupting the pregnancy,” Rivas said.

In Ecuador, Jaime Pallares, a spokesman for the Mother Mary and Queen Catholic lay group, said that as a believer he follows the word of the pope. But on this issue, he personally differs.

“It’s difficult for me to interpret the Holy Father’s sentiment. From my perspective the best alternative would be to maintain some days of chastity,” said Pallares. “I’m not going to die of chastity.”