DOH advice to women: Put off pregnancy due to Zika 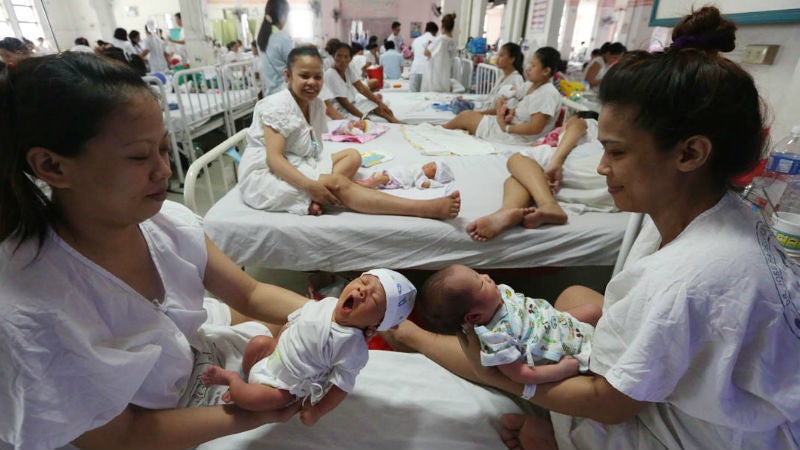 MOTHERS and babies at Fabella Hospital in Manila MARIANNE BERMUDEZ

THE DEPARTMENT of Health (DOH) on Tuesday advised Filipino women who are currently pregnant or planning to get pregnant to avoid travel to Brazil and other areas, mostly in Latin America, where the Zika virus is known to be spreading.

Women in their reproductive years who must travel to these areas should take precautions or postpone pregnancy by using family planning methods, the DOH added.

“We are not advising women not to get pregnant at all,” said Health Secretary Janette Garin in an interview with reporters Tuesday.

“What we are saying is that those who fear the virus and who can wait awhile to get pregnant until there are already concrete answers to questions about the disease, may observe some precautions,” said the health chief.

The Zika virus, which is spread by mosquitoes, is known to cause neurological birth defects when contracted by pregnant women.

Garin noted that there were still many questions on the new emerging disease that science has yet to answer. She said how and at what stage the virus infects an unborn child was still a mystery. Experts are also still trying to find out whether or not it was possible to intercept the virus before it affects unborn babies, she added.

The World Health Organization declared the spread of the Zika virus as an international public health emergency because of its suspected link to the neurological birth disorder microcephaly, a condition where the baby’s head is smaller than usual.

Garin said that while experts have yet to document a direct relationship between the virus and microcephaly, there was evidence of a “strong causal relation.” There was also evidence linking the virus to spontaneous abortions among pregnant women, she added.

In cases of infected pregnant mothers in the country, the government will offer them support and counseling to prepare them emotionally and psychologically and for the economic burden of raising children with microcephaly, said Garin.

“Abortion is illegal in the Philippines so it cannot be an option,” she said.

“The DOH cannot treat [microcephaly] because it is something as of the moment that science cannot cure,” she added.

The Zika virus, which has recently been found to be also transmissible through sexual contact, has been spreading rapidly throughout Latin America. It was first detected in May last year in Brazil, where health authorities observed a spike in cases of microcephaly among newborns.

Aside from countries in Central and South America, Zika virus cases have also been monitored in the Pacific islands of Samoa and Tonga.

The symptoms of Zika disease is similar to those of dengue fever but milder, according to health officials. But pregnant women are the most vulnerable as they can pass on the virus to their unborn child and this may cause microcephaly.