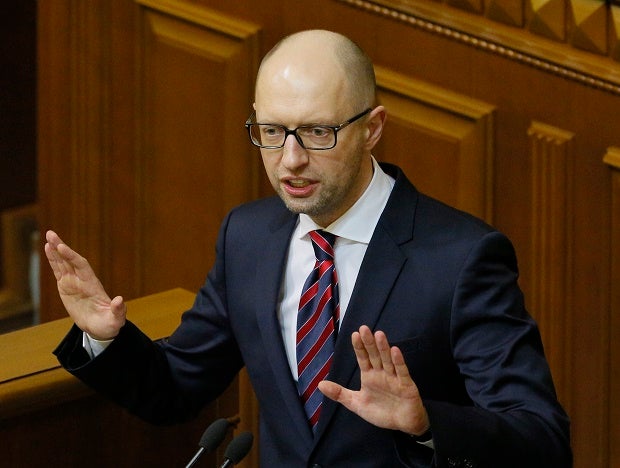 KIEV, Ukraine—Ukrainian Prime Minister Arseniy Yatsenyuk survived a no confidence vote Tuesday that came hours after the president asked him to resign because he had lost the public’s trust.

The motion to oust the pro-Western government leader collected only 194 of the required 226 votes in the 450-seat parliament.

The war-scarred country is now left standing in the peculiar position of the two top leaders at seeming odds over how Ukraine should pursue its stalled fight against corruption and overcome a deep economic malaise.

But Yatsenyuk put up a passionate defense of his record before skeptical lawmakers.

“We saved this country and I want you to respect that,” Yatsenyuk said.

The 41-year-old former banker has been in office since Ukraine’s dramatic February 2014 revolution ousted the ex-Soviet country’s Russian-backed leader and set it on a westward course.

READ: Ukrainian PM warns West not to lift Russia sanctions
He was credited with helping negotiate a massive Western financial rescue package that helped bolster the government while it was fighting a brutal pro-Russian revolt in the separatist east.

“We will hand over the country to a new government with honor and dignity,” he concluded before parliament decided to keep him in office.

Poroshenko had earlier taken the unusual step of asking his prime minister to voluntarily make way for a fresh team that enjoyed broad public support.

“It is not clear that successful reforms can only be conducted by a government that enjoys sufficiently high public support?” Poroshenko said in a statement.

“In order to restore trust, therapy is no longer enough—you need surgery.”

But only 97 of the 143 deputies in the president’s parliamentary faction ended up listening to Poroshenko’s advice.

The government’s collapse had threatened to jeopardize the delivery of a massive IMF-led rescue package aimed at reviving Ukraine’s shattered economy and putting it on a course toward sustainable growth.

Yatsenyuk has been a passionate foe of Russia who endeared himself to the West by promoting belt-tightening measures that were promised but ignored by a succession of preceding leaders.

But his vows to clean up the government by cutting its ties to tycoons soon fell flat with voters who accused him of backing the interests of the very billionaires he had vowed to sideline.

“People expected real and quick changes from Yatsenyuk, and they did not come,” political analyst Mykola Davydyuk told AFP.

And presidential party member Yuriy Lutsenko accused the government “of stopping its work in September or October and ever since only been trying to save itself” from a major overhaul.

The president’s statement also sought the resignation of Prosecutor General Viktor Shokin—a public hate figure who was widely accused of covering up corruption within his own agency.

Shokin was dealt a blow when a raid on the homes of two high-ranking prosecutors in July found large quantities of diamonds and cash.

Yatsenyuk assumed office in February 2014—just weeks before Russia’s annexation of Crimea and the bloody pro-Moscow insurgency in eastern Ukraine that followed.

His resolute commitment to the European Union helped persuade the IMF to force other lenders to join a $40-billion (35.8-billion-euro) economic rescue package aimed at helping the Ukrainian government avoid a looming debt default.

But the political uncertainty that has rocked Ukraine since this month’s resignation of its reformist economy minister and a top prosecutor over their alleged inability to fight state graft threatens to put that assistance on hold.

IMF chief Christine Lagarde warned last week that it was “hard to see” how the bailout could continue without Ukraine pushing through the economic restructuring and anti-corruption measures it had signed on to when the package was agreed.

Ukraine’s economy shrank by about 10 percent last year while annual inflation soared to more than 43 percent even with the Western assistance in place.

A withdrawal of the funding could crush Ukraine’s hopes of a 2016 economic revival and a modest budget deficit.

But Yatsenyuk’s survival means that parliament cannot try to oust him again until after its current session ends on July 22.