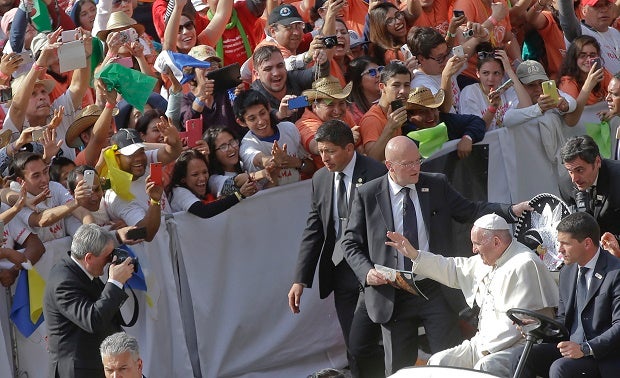 Pope Francis is cheered by youths as he arrives to the stadium in Morelia, Mexico, Tuesday, Feb. 16, 2016. Francis arrived in the heart of Mexico’s drug-trafficking country to offer words of encouragement to clergy trying to minister to a people tormented by the violence and gang warfare of the drug trade. AP Photo

MORELIA, Mexico—Pope Francis urged Mexican priests and nuns on Tuesday to not despair in the face of violence as he visited a former bastion of a cult-like drug cartel.

The pontiff made his plea during a mass with more than 20,000 clergymen and seminarians who chanted and danced at a stadium in Morelia, the capital of the western state of Michoacan.

Michoacan endured some of the most gruesome episodes of Mexico’s drug war, which has left 100,000 people dead or missing in the past decade.

Around 40 clergymen, seminarians and Catholic lay people were killed in that span, including five in Michoacan, according to the Catholic Multimedia Center. One priest celebrated mass with a bulletproof vest in Michoacan.

“What temptation can come to us from places often dominated by violence, corruption, drug trafficking, disregard for human dignity, and indifference in the face of suffering and vulnerability?” the pope asked, lamenting that this had turned into a “permanent system.”

“Faced with this reality, the devil can overcome us with one of his favorite weapons: resignation,” the pope said.

The pope cited the example of Michoacan’s first bishop, Vasco Vazquez de Quiroga, who defended the indigenous Purepechas from mistreatment “in the midst of so much paralyzing injustice” in the 16th century.

In a sign of the clergy’s concerns about the violence afflicting their country, the priests and nuns loudly counted from one to 43 before the pope’s arrival, in reference to the disappearance of 43 students in neighboring Guerrero state in 2014.

Francis has used his five-day cross-country trip, which ends Wednesday, to press political leaders to provide “effective security” to Mexicans and for bishops to show “prophetic courage” against drug gangs.

Hundreds of thousands of people swarmed Morelia’s colonial streets to cheer the pope amid a heavy police contingent.

“I have faith that things will change after the pope’s visit, that we will realize that violence is not the way to go,” said Jose Rodriguez, a migrant who traveled from Los Angeles for the pope’s visit.

After the mass, the pope visited the city’s 17th century cathedral, where he met with local children and was serenaded by a choir.

“Keep being created, seek beauty, and never allow anybody to trample you,” the pope told the singers before heading to a second mass at a stadium packed with young people.

It was just steps away from the cathedral that two grenades blew up in a packed plaza during independence day festivities on September 15, 2008, killing eight people and injuring some 100. Drug cartels were the main suspects.

It was there in 2006 that the country came to know La Familia Michoacana after the cartel rolled five severed heads down a dance floor with a message promising “divine justice.”

The gang was founded by Nazario Moreno, alias “The Craziest One,” a self-styled messiah who wrote the “Gospel of La Familia”—a religion-inspired rulebook banning gang members from consuming drugs or alcohol.

The government wrongly declared Moreno dead after a 2010 gunfight with police. Troops killed him for good in 2014.

After his first “death,” the Knights Templar cartel emerged and Moreno became a folk saint known as “San Nazario,” with shrines featuring statues of him dressed like a crusader with a red cross.

Fed up with the police’s inability or unwillingness to quell the cartels killings, kidnappings and extortion, farmers formed vigilante groups in 2013.

The federal government deployed security forces to help the self-defense forces, leading to the capture or killing of the cartel’s top leaders.

While the cartel was severely weakened, smaller gangs have emerged, including La Nueva Familia (The New Family).

Meanwhile, the vigilantes were sullied by infighting and accusations that cartels infiltrated them.

Authorities have decided to disarm the militias and integrate them into regular police units.

“Hopefully the government will do its job well so that we don’t have to take up arms again,” Hipolito Mora, a lime grower and founder of the vigilante movement, told AFP.