Bible-quoting Pacquiao: ‘I’m not condemning anyone, but…’ | Inquirer News

Bible-quoting Pacquiao: ‘I’m not condemning anyone, but…’ 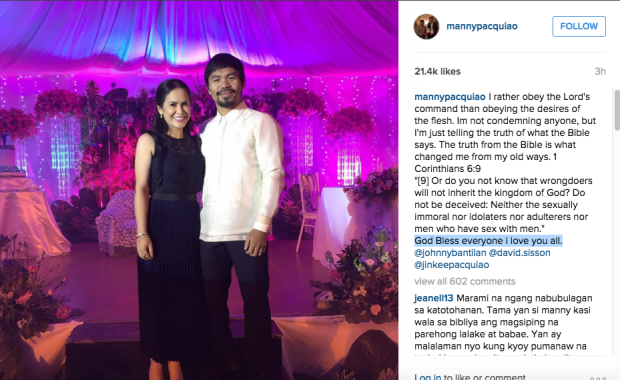 Filipino boxing icon and Sarangani representative Manny Pacquiao cited a verse from the Bible to defend his statement against same-sex unions—a remark which drew flak on social media and did not sit well with some celebrities.

In a post on his Instagram account, Pacquiao clarified that he was not condemning anyone but he was only abiding with what the Bible supposedly said.

“I [would] rather obey the Lord’s command than obeying the desires of the flesh. [I’m] not condemning anyone, but I’m just telling the truth of what the Bible says,” the boxer-lawmaker said.

He then cited 1 Corinthians 6:9 which read: “[9] Or do you not know that wrongdoers will not inherit the kingdom of God? Do not be deceived: Neither the sexually immoral nor idolaters nor adulterers nor men who have sex with men.”

Pacquiao, a senatorial aspirant under the United Nationalist Alliance, ended his message with “God Bless everyone [I] love you all.”

The 37-year-old lawmaker who is on his second term in office, has his own Christian ministry.

Pacquiao was heavily criticized on social media after he said in a TV-5 interview that same-sex unions are “worse than animals.”

Pacquiao, according to the latest Social Weather Stations (SWS) survey, placed eighth in the “magic circle of 12” circle for senator. AJH/IDL