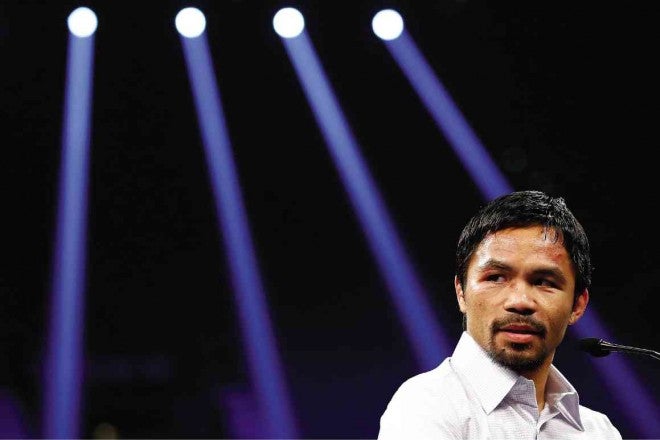 Sarangani Rep. and senatorial candidate Manny Pacquiao compared the lesbian, gay, bisexual and transgender community to animals, promptly getting himself flak on social media at the start of the 2016 elections campaign.

In an interview with the TV-5 group for its “Bilang Pilipino” elections coverage, Pacquiao said that “common sense” would tell you that there are no animals who engage in sex with the same gender.

By analogy, then, if persons engage in same-sex relations, then they are worse than animals, Pacquiao added.

(It’s only common sense. Would you see any species of animals who engage in male to male, female to female [sexual] relations? Animals, then, are better than humans [in that sense]. They know how to distinguish males from females.)

(If people then engage in male to male, female to female relations, then they are worse than animals.)

Despite Pacquiao’s claims of “common sense,” however, studies have shown that even animals engage in homosexual behavior.

A boxing champion and a “born again” Christian pastor, Pacquiao made the statement at the height of the national campaign for his senatorial bid under the United Nationalist Alliance (UNA) of Jejomar Binay.

Pacquiao has been missing the campaign trail since it started Feb. 9 to prepare for his fight with Timothy Bradley in April.

But he has ranked quite high on the voters’ preference polls, getting in the “magic 12” of senators in the coming 2016 elections.

According to the latest Pulse Asia survey conducted on Jan. 24 to 28, Pacquiao got in the eight to 10th rank, getting 46.9 percent of respondents.

The video of the interview has since gone viral on social media, garnering over 1.1 million views. It also got over 22,000 shares and 12,400 likes as of wiritng.

Netizens on Twitter went to the point of urging voters not to elect Pacquiao to the Senate.

“Hope the LGBT community spearheads a campaign to keep Pacquiao off the Senate. We don’t need another bigot there,” Cecila (@ceso) said.

“Not sure if the best way to refute Manny Pacquiao’s “masahol pa sa hayop” statement is to tell him there are homosexual animals,” Jacques Jimeno tweeted (‏@jacjimeno).

“Hey, Manny Pacquiao. When did love become more inhuman than the lack of compassion?” Severo tweeted on his social media account (@TheRainBro).

“We Filipinos love our symbols and signifiers. Pacquiao won that seat because he symbolized and signified hope, resilience, greatness. But with that statement he easily became a symbol and signifier for ignorance and bigotry,” Severo added.

Posting a text on Instagram, Seguerra said that the people should not vote for the senatorial aspirant even if he had brought pride to the country before.

“I am so (expletive) mad I don’t know what to say. You might’ve done our country proud, but with your statement, you just showed the whole country why we shouldn’t vote for you. And yes, I think you are ignorant, bigoted hypocrite. You made me lose all the respect I had for you, Mr. Pacquiao,” the post read,

Even Mo Twister, real name Mohan Gumatay, said Pacquiao’s remarks were among the “more offensive” he has ever heard.

“So I’m waiting for @TMZ and/or @sportscenter to chime in on Manny Pacquiao’s incredibly anti-gay remarks. Among the more offensive I’ve heard,” he tweeted (@djmotwister).

“What?! Why do people have to compare homosexuality to animals?! WHY?? Ugh,” he said on his blog (PerezHilton.com).

“Look, if your religious beliefs prevent you from accepting same-sex marriage, that’s on you. That’s YOUR idea of propriety. But there’s absolutely no call to demonize and denigrate gay people by comparing them to animals just because their love is something YOU’RE unable to accept,” he added.

Hilton said probably the worse thing is the fact that Pacquiao could easily win a Senate seat despite his views on same sex marriage.

“The sad thing here is that Pacquiao is world famous and a national hero as a boxer, so we can only guess he’ll win his election to the Senate pretty easily – and then spread this awful attitude around within his country. Double ugh,” Hilton said.

One netizen backed up Pacquiao for his anti-gay remarks.

“Manny doesn’t say that being a gay or lesbian per se is a sin. It’s the act that he is pointing out,” said kitkpau (@paulocadungon).

INQUIRER.net has reached out to Pacquiao for his comment on the social media backlash and is waiting for his reaction. CDG