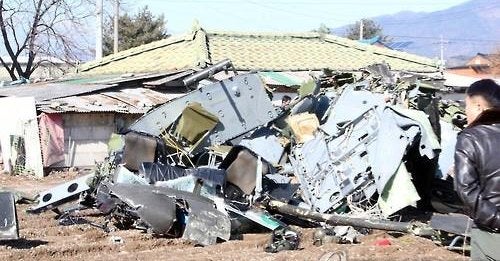 A Bell UH-1H Iroquois helicopter crashed in Gangwon Province of Chuncheon in South Korea killing three and injuring one. The cause is still undetermined. TWITTER PHOTO/Yonhap News Agency

SEOUL — A South Korean military helicopter crashed in a field near an army base on Monday, killing three crew members and leaving one seriously injured, Yonhap news agency reported.

The army chopper crashed next to its base in the northeastern province of Gangwon at around 10:10am (0110 GMT) while on a routine test flight, the agency said, citing police and fire officials.

All four crew members were rushed to a nearby hospital where three were later pronounced dead. The 50-year-old pilot survived but was in a critical condition.

Pictures of the wreckage showed the helicopter completely destroyed.

The precise cause of the crash was not immediately known.