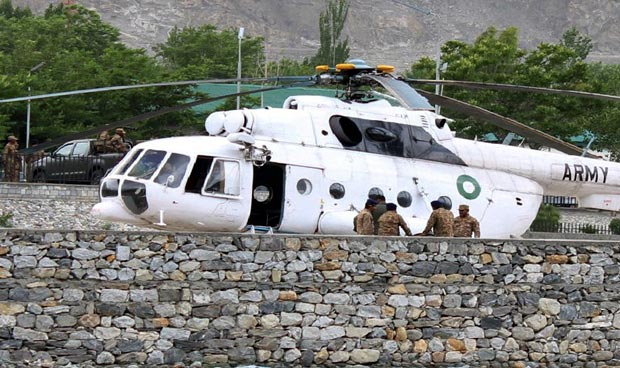 Pakistani soldiers gather beside an army helicopter at a military hospital where victims of a helicopter crash were brought for treatment in Gilgit on May 8, 2015. AFP PHOTO/ FARMAN KARIM

GILGIT, Pakistan—A Pakistani military helicopter crashed into a school in the country’s north Friday, killing seven people including the Norwegian and Philippine ambassadors, and setting the building ablaze, the army said as officials warned that casualties could rise.

The helicopter was one of three carrying a delegation of envoys to inspect projects on a three-day trip to Pakistan’s Gilgit-Baltistan territory where they were set to meet with Prime Minister Nawaz Sharif.

Leif H. Larsen, the Norwegian envoy, and Domingo D. Lucenario Jr of the Philippines were killed along with the wives of the Malaysian and Indonesian ambassadors, as well as the helicopter’s two pilots, according to official tweets by the army.

In Manila, the Department of Foreign Affairs confirmed the death of Lucenario in a statement issued Friday night. The full statement:

”The Department of Foreign Affairs is deeply saddened by the untimely demise of Philippine Ambassador to Pakistan Hon. Domingo D. Lucenario, Jr. due to a helicopter crash incident in the Naltar Valley area of Pakistan.

”Ambassador Lucenario was a career ambassador who served the Philippine Government for over 25 years. During his term as Ambassador to Pakistan, relations between the Philippines and Pakistan have enjoyed a robust partnership in various areas of cooperation.

”Ambassador Lucenario was also the Philippines’ non-resident Ambassador to Afghanistan, Kyrgyzstan and Tajikistan.

”A lawyer by profession, he served the Department in various capacities including assignments in Germany, Hong Kong, Australia, and as former Philippine Ambassador to Kenya with concurrent jurisdiction to 12 African nations. He was the Philippine Permanent Representative to the United Nations Environment Program (UNEP) and the United Nations Human Settlements Program (UN Habitat). He also served as Deputy Chief of Presidential Protocol under the Ramos Administration aside from various positions in the Home Office.

The Norwegian government has also confirmed the death of its ambassador to Pakistan.

It was the worst air crash since 2012 when a civilian 737 went down in Islamabad, killing 130 people.The incident was also reminiscent of the 1988 plane crash which killed then military-ruler General Zia-ul-Haq as well as the US ambassador at the time Arnold Raphel. 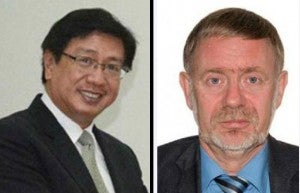 A senior local administration official warned the situation was “urgent” after the helicopter—one of three carrying the delegation, their aides and members of the press—crashed into the school with children inside.

Prime Minister Sharif “expressed deep grief and sorrow” over the incident according to a statement issued by his office, which added that he had been on his way to the region but his plane returned to Islamabad after hearing the news.

According to a list of passengers obtained by AFP, the ambassadors of Indonesia, Lebanon, Malaysia, the Netherlands, Romania, Norway, South Africa, the Philippines and Poland were scheduled to fly on the helicopter.

“It was a diplomatic trip with members of 37 countries in total,” said a passenger in one of the helicopters, who requested anonymity, adding that the school had caught fire after the crash.

The passenger added that the air convoy was supposed to have included four helicopters but the number was later reduced to three.

A senior local administrative official said: “We have been told to send in as many ambulances as we can because the situation there is ‘urgent'”.

The injured were being air lifted to a military hospital in Gilgit, the region’s administrative capital, some 50 kilometres (30 miles) to the southwest, added another senior local police official.

The injured were being air lifted to a military hospital in Gilgit, the region’s administrative capital, some 50 kilometres (30 miles) to the southwest, added another senior local police official.

In the city of Gilgit, a hospital official said injured were being carried on stretchers to the emergency ward of the Combined Military Hospital.