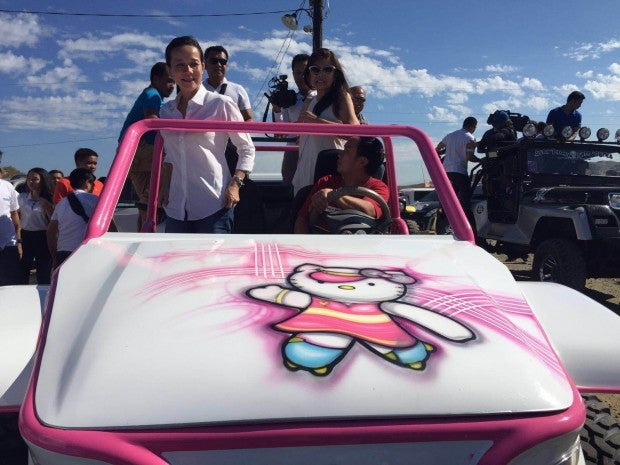 Presidential aspirant Senator Grace Poe is is joined by Ilocos Norte Governor Imee Marcos in a tour of the province. MAILA AGER/INQUIRER.NET

After rallying supporters in her father’s home province in Pangasinan last week, presidential aspirant Senator Grace Poe will go on a “sentimental journey” on Tuesday to Jaro, Iloilo, her known birthplace, “carrying the dreams of a foundling who promises a “Gobyernong may Puso” for all Filipinos, a statement from her office said on Monday.

Poe was found in a church in Iloilo when she was a baby and was later adopted by popular actors, the late Fernando Poe Jr. and Susan Roces. Her being a foundling is one of the subjects of the disqualification cases filed against her.

The senator along with running mate, Senator Francis Escudero, and their senatorial bets will hold a rally in Carles town where they are expected to present their platform of government.

The candidates will then proceed to the Barotac Viejo Public Market for a quick “meet-and-greet” with market vendors, buyers and workers. A press conference will follow at lunchtime.

Under her “Gobyernong may Puso,” Poe said she would embark on a policy of providing solutions to the pressing challenges of ordinary Filipinos, such as high taxes, low wages, unreliable transport system and an impoverished agricultural sector.

In the afternoon, Poe will be at the University of Iloilo for a no-holds-barred forum with students and faculty concerning her plans and programs of government, which are anchored on three things: Kabuhayan, Karunungan at Kaligtasan.

The University of Iloilo, which was founded in July 1947 by the Lopez brothers, Don Eugenio and Hon. Fernando Lopez, has some 7,000 students taking up courses on arts and science, accountancy, nursing, law, engineering and maritime education, among others.

After a brief rest from her engagement at the University of Iloilo, Poe will make her way to Jaro, where a local churchgoer had found her, an abandoned infant, in the holy water font of the Jaro Metropolitan Cathedral. She was then brought to the parish priest who named her “Grace” in the belief that her finding was through the grace of God.

Iloilo is Poe and Escudero’s second stop in the Visayas. The two visited Cebu last February 10 or a day before the official campaign period kicked off.