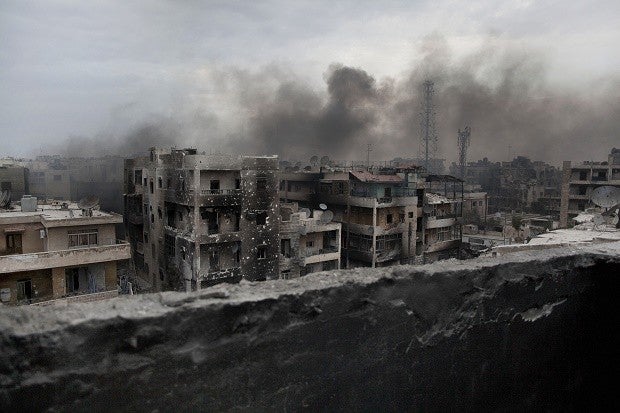 In this Tuesday, Oct. 2, 2012 file photo, smoke rises over Saif Al Dawla district, in Aleppo, Syria. Aleppo was one of the last cities in Syria to join the uprising against President Bashar Assads government which began in 2011. AP Photo

Tensions over Syria have continued to mount despite the proposal from international powers in Munich on Friday for a “cessation of hostilities” within a week.

Defying US and French calls, Turkey on Sunday carried out a second day of shelling on a Kurdish-Arab alliance advancing in northern Aleppo province, prompting condemnation from Syria’s government.

And in a telephone call with German Chancellor Angela Merkel, Prime Minister Ahmet Davutoglu said Turkey will continue to strike back at Kurdish fighters of the Democratic Union Party (PYD) in Syria.

Turkey says it is targeting Kurdish forces it accuses of links to the banned Kurdistan Workers’ Party (PKK), which has waged a decades-long insurgency against the Turkish state.

A statement from Davutoglu’s office said he told Merkel that Ankara “will not permit the PYD to carry out aggressive acts. Our security forces gave the necessary response and will continue to do so”.

Washington has been working closely with Kurdish forces in northern Syria, and the Turkish attacks highlighted tensions within the US-led coalition battling the Islamic State group in Syria and Iraq.

Differences were also clear between Washington and Moscow, which backs international diplomatic efforts to resolve the Syria conflict but has also launched air strikes in support of President Bashar al-Assad, a key ally.

The White House said Sunday that President Barack Obama in a phone call with Russian counterpart Vladimir Putin had urged Moscow to end the strikes.

“President Obama emphasized the importance now of Russia playing a constructive role by ceasing its air campaign against moderate opposition forces in Syria,” it said.

Russia has long insisted that it targets only “terrorist” groups in Syria.

The Turkish shelling in northern Syria has added to an already complicated situation in Aleppo province, where regime forces have made significant advances with backing from Russian air strikes.

Kurdish forces already control large parts of Syria along the border and Ankara is concerned the SDF will gain new ground.

Turkey’s state-run Anatolia news agency said the shelling resumed for a second day on Sunday, with army howitzers on the border hitting Kurdish targets around the Syrian town of Azaz.

It said the shelling was in response to incoming fire and targeted the PYD, whose People’s Protection Units (YPG) is a key component of the SDF.

The SDF announced the deaths of three fighters in the shelling, and the Britain-based Syrian Observatory for Human Rights saying a female civilian was also killed.

It said the SDF had taken the village of Ain Daqna, cutting the main road and rebel supply route between Tal Rifaat and the border.

It also reported fierce fighting between the SDF and Islamist insurgents in western Tal Rifaat, with at least 17 rebels killed.

The US State Department had on Saturday urged the Kurds to stand down, as well as calling on Ankara to cease its shelling.

France joined that call on Sunday, with its foreign ministry urging “an immediate halt to the bombing, both that of the regime and its allies throughout the country and that of Turkey in the Kurdish zones”.

Damascus called the Turkish strikes a violation of its territory, and urged UN Security Council action to “put an end to the crimes of the Turkish regime”.

It also accused Ankara of allowing some 100 gunmen to enter Syria. The Observatory said some 350 Islamist fighters had been allowed to travel through Turkish territory on Saturday to reinforce Islamist rebels in Azaz and Tal Rifaat.

The SDF advances came as Syria’s regime piled pressure on rebels throughout northern Aleppo province in a major Russian-backed operation that has displaced tens of thousands of civilians.

The operation has virtually encircled rebel-held eastern Aleppo city and raised concerns among opposition backers including Turkey and Saudi Arabia.

Both belong to the US-led coalition carrying out air strikes in Syria, and Riyadh has now deployed warplanes to the Turkish base of Incirlik, a hub already being used by American, British and French aircraft.

Senior Saudi defence official Brigadier General Ahmed al-Assiri also said Saturday that there was consensus within the coalition on “the need for group operations”.

He said military experts would meet shortly to decide “the role to be played by each country”.

Echoing Obama’s concerns, a senior figure in the Syrian opposition on Sunday criticised the truce deal as unworkable without an end to Russian strikes.

“What we need is action, and the action I see is that Russia is killing Syrian civilians,” Riad Hijab told the Munich Security Conference.

Read Next
Marcos, Escudero share top spot for VP in SWS poll
EDITORS' PICK
IATF to LGUs: Issue ordinances vs attacks on frontliners, COVID-19 patients
Quick chat with Nicole Andersson: ‘You really don’t need much to be happy’
Robredo spox thanks Duterte for defending VP’s efforts vs COVID-19
Diokno to Duterte: OK to make fun of buck tooth, but focus on people’s needs first
Nograles: Cabinet members to donate 75% of monthly salary to aid COVID-19 fight
10 Filipinos positive for COVID-19 in UK, 7 in Ireland — envoy
MOST READ
Coronavirus hotbed Rizal to shut borders on April 6
Gov’t mulling quarantine period extension of 15-20 more days
Sotto on Isko Moreno’s call: We do our job without the media following our every move
Robredo spox thanks Duterte for defending VP’s efforts vs COVID-19
Don't miss out on the latest news and information.