Assad vows to retake all of Syria, keep ‘fighting terrorism’ 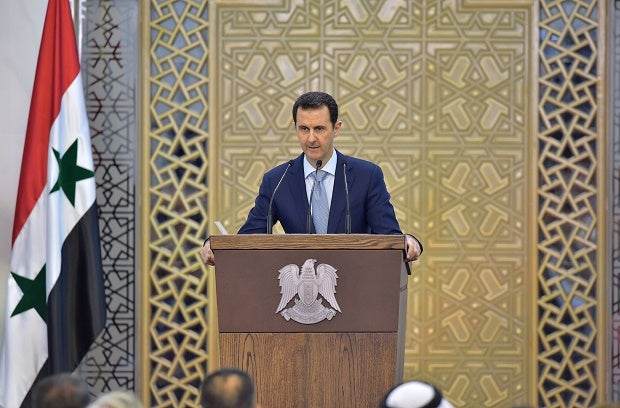 In this Sunday, July 26, 2015, file photo, provided by the Syrian official news agency SANA, Syrian President Bashar Assad delivers a speech in Damascus, Syria. Syrian peace talks scheduled to begin in a week are looking increasingly moot as regional tensions boil over and a string of battlefield victories by government troops further bolster the hand of President Bashar Assad, plunging the rebels into disarray. SANA via AP File Photo

DAMASCUS, Syria—President Bashar al-Assad has vowed to recapture the whole of Syria and keep “fighting terrorism” while also negotiating an end to the war, as international pressure mounts for a ceasefire.

His defiant stance, in an exclusive interview with AFP released Friday, doused hopes of an imminent halt to hostilities that world powers are pushing to take effect within a week.

READ: Assad: no political process while ‘terrorists’ in Syria

Assad said the main aim of a Russian-backed regime offensive in Aleppo province that has prompted tens of thousands of people to flee was to cut the rebels’ supply route from Turkey.

He said his government’s eventual goal was to retake all of the country, large swathes of which are controlled by rebel forces or the Islamic State of Iraq and Syria (ISIS) jihadist group.

READ: With Islamic State targeted, what happens to Syria’s Assad?

“It makes no sense for us to say that we will give up any part,” he said in the interview conducted on Thursday in Damascus, before a plan for a nationwide “cessation of hostilities” in Syria was announced.

Assad said it would be possible to “put an end to this problem in less than a year” if opposition supply routes from Turkey, Jordan and Iraq were severed.

But if not, he said, “the solution will take a long time and will incur a heavy price.”

Assad said he saw a risk that Turkey and Saudi Arabia, key backers of the opposition, would intervene militarily in Syria.

World powers on Friday announced an ambitious plan to stop fighting in Syria within a week, but doubts have emerged over its viability, especially because it did not include ISIS or Al-Qaeda’s local branch.

US Secretary of State John Kerry said there were “no illusions” about the difficulty of implementing a nationwide “cessation of hostilities” as he announced the deal in Munich alongside Russian Foreign Minister Sergei Lavrov.

The US State Department also hit back at Assad’s claim he wants to retake the whole country, with spokesman Mark Toner calling him “deluded if he thinks that there’s a military solution to the conflict.”

Moscow says its more than four-month-old bombing campaign in Syria targets ISIS and other “terrorists,” but critics accuse Russia of focusing on mainstream rebels.

Lavrov underlined that “terrorist organisations” such as ISIS and Al-Qaeda-affiliated Al-Nusra Front “do not fall under the truce, and we and the US-led coalition will keep fighting these structures.”

He also talked about “direct contacts between the Russian and US military” on the ground, where they back opposing sides, although the Pentagon said there were no plans for increased military cooperation.

Pope Francis and Russian Orthodox Patriarch Kirill on Friday called for aid to be delivered to “the afflicted populations and to the many refugees seeking safety in neighbouring lands” after they met in Havana.

But after Assad’s forces this month nearly encircled Aleppo, Syria’s second city, several nations put the onus on Moscow to implement the deal.

“Through its military action on the side of Assad’s regime, Russia had recently seriously compromised the political process. Now there is a chance to save this process,” German foreign ministry spokeswoman Christiane Wirtz said.

He later said that Russian bombing killed 16 civilians in Syria early Friday “despite the agreement we made last night.”

However, analysts remained sceptical about the chances of ending a war that has killed more than 260,000 people and displaced more than half the population.

“There are huge question marks,” said Julien Barnes-Dacey of the European Council on Foreign Relations.

The failure to include Al-Nusra was particularly important, he said, since the group is active in Aleppo and surrounding regions, and many of the more “moderate” rebels have links with it.

“This effectively gives the green light for the Syrian government and its allies to carry on military action while paying lip service to the agreement,” said Barnes-Dacey.

Other analysts said it was significant that Washington and Moscow had been able to strike a deal at all.

The US and Russia have “taken ownership of this now. This is important,” said Michael Williams, a former UN diplomat in Lebanon and now at London’s Chatham House think tank.

“It will put quite a bit of pressure on Assad and his regime. It’s very hard for them now to walk away.”

Peace talks collapsed earlier this month over the offensive on Aleppo, which has forced at least 50,000 people to flee and killed an estimated 500 people since it began on February 1.

A key Syrian opposition body, the High Negotiations Committee, said Friday it was up to rebels on the ground whether to implement the deal.

Assad supporter Iran said it would work with rival Saudi Arabia to fight ISIS in Syria.

Kerry said talks between the opposition and the regime would resume as soon as possible, but warned that “what we have here are words on paper—what we need to see in the next few days are actions on the ground.”