Assad: no political process while ‘terrorists’ in Syria 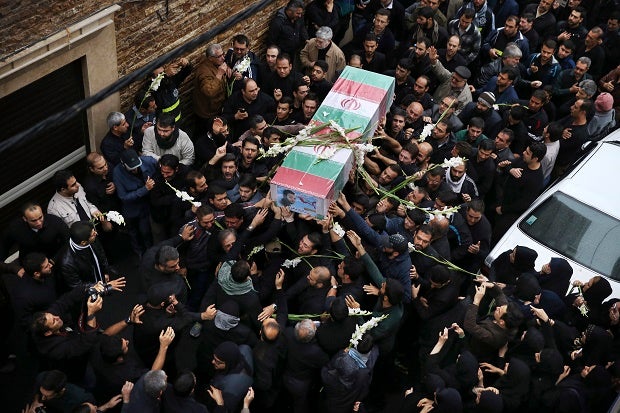 Iranian mourners carry the flag draped coffin of Abdollah Bagheri Niaraki, a onetime bodyguard of former President Mahmoud Ahmadinejad who was killed while fighting in Aleppo in Syria, during his funeral service in front of his home in downtown Tehran, Iran, Thursday, Oct. 29, 2015. Iran’s semi-official Fars news agency reported last Friday that Niaraki was killed while fighting alongside Syrian government forces against “terrorists” in the northern city of Aleppo. Iran is a longtime ally of Syrian President Bashar Assad and has provided crucial economic and military backing throughout the uprising and subsequent civil war. Iran says it has sent military advisers to Syria but no combat troops. AP

Assad in an interview shown Wednesday night said “nothing can start before defeating the terrorists who occupy parts of Syria.”

Assad said if Syria’s people want presidential elections “there will be no red line” against holding them. Asked how much territory the government still controls, 4 1/2 years into a civil war, Assad replied, “geographically speaking, the situation changes day by day.”

At heart of Syria talks, what to do about Assad