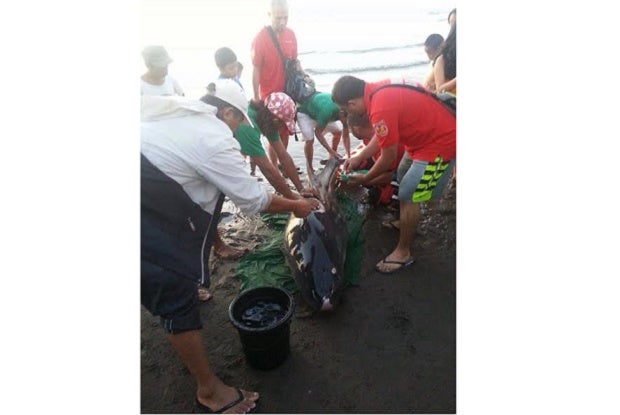 A team of rescuers and fishermen attend to a stranded pygmy sperm whale found along the coastline of Sariaya, Quezon on Saturday. Photo from the Facebook page of Sariaya disaster risk reduction and management council

meters (seven feet) was discovered in the shallow waters near the Villa Del Prado resort in Barangay (village) Bignay 1 at 5:30 a.m.

The FLETF rescue team treated the whale’s bruises in its body, fins and tail.

“We believed that the whale got entangled with a fishing net and escaped. That explained the bruises,” Gosas said by telephone.

When the team ensured that the whale was in good condition after an examination, the rescuers released the sea mammal to a deeper portion of the bay at 7:30 a.m.

However, the whale swam close to the fishermen’s boat and accompanied them until they reached the shore.

The group brought the whale back to the bay aboard a motorized fishing boat and released it to a portion farther away than the first location.

“We thought that the whale would swim back to the [deeper portion of the] sea but we were wrong,” Gosas said.

After a few minutes, he said his team received an information that a whale was found stranded in the neighboring village of San Roque. Upon checking, they learned that it was the same pygmy sperm whale.

Gosas ordered the fishermen in the village to bring the whale back to another portion of Tayabas Bay, farther than the first two locations where it was released earlier.

The International Union for Conservation of Nature, on its website, said the pygmy sperm whale is protected under the United States Marine Mammal Protection Act and the Convention on International Trade in Endangered Species of Wild Fauna and Flora.

Gosas recognized the help of the fishermen, coastal villagers and beach resort operators in the protection of endangered marine species.

“They were all aware that catching and killing of endangered marine species is against the law and they have to be protected,” Gosas said.

The Sariaya coastline, host to many beach resorts and other tourist-oriented businesses, serves as a nesting ground for turtles that usually come to lay and hatch their eggs from October to December. RAM