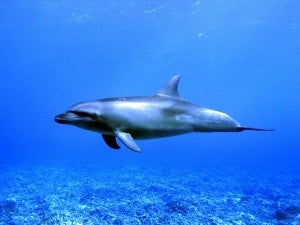 Reil Briones, village head of Barangay Talao-Talao, said the sea creatures were found on the shore by villagers who immediately notified local officials. The animals had minor bruises on their bodies.

“The fishermen in our village are aware that dolphins are included in the list of protected species and that it is against the law to capture and butcher them,” Briones, who is also a local radio broadcaster, told the Inquirer over the phone.

He said he immediately contacted the city veterinarian’s office for treatment of the injured dolphins and reported the incident to local environment officials for documentation.

“As soon as the authorities declare that they are fit to be returned to the sea, we will immediately release them back to their natural habitat,” Briones said.

It was the third time dolphins had washed ashore at Talao-Talao. In both previous instances, the dolphins were released back to the sea.

Read Next
New cardinal urged to use clout to hasten peace in Mindanao
EDITORS' PICK
Nothing’s certain so here’s how everyday Filipinos can make the most out of their Plan B
Do all the things you do, faster
‘Seniority’ requirement despite vacant posts in DOH bothers senators
House energy committee chair Arroyo bats for cheap electricity
PNP vows to bring justice for slain Percy Lapid; says probe underway
Percy Lapid’s kin: ‘We demand that his cowardly assassins be brought to justice’
MOST READ
Student stabs teacher dead in Samar town
Radio commentator Percy Lapid shot dead in ambush
Final net satisfaction rating slightly decreases for Robredo, Sotto — SWS
Kai Sotto shows mettle as Adelaide 36ers beat Phoenix Suns in NBA preseason
Don't miss out on the latest news and information.