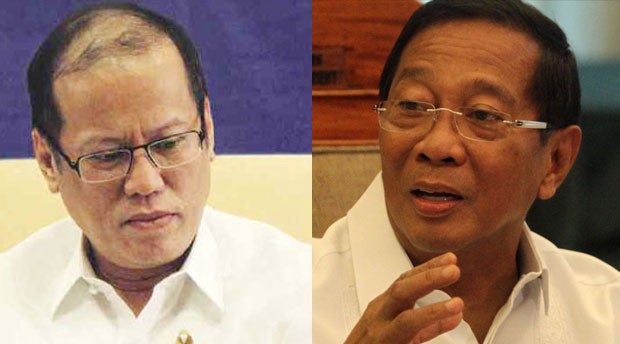 With a little more than four months left in office, President Aquino and Vice President Jejomar Binay experienced declining approval and trust ratings in January, according to the latest Pulse Asia survey which showed none of the country’s highest officials receiving majority scores.

In the “Pulso ng Bayan” nationwide survey, the results of which were released on Friday, 49 percent of 1,800 voter respondents approved of the President, 6 points lower than the 55 percent registered in December.

Trust in the President was also down by 8 points to 45 percent from 53 percent.

Binay’s approval rating also declined, from 52 percent to 47 percent, and his trust rating from 49 percent to 45 percent.

The survey, which had a margin of error of plus-or-minus 2 percentage points, was conducted from Jan. 24 to 28, during which the country marked the first anniversary of the Jan. 25, 2015, Mamasapano massacre in which 44 elite police commandos out on a mission to arrest a foreign terrorist were treacherously ambushed and killed by Moro rebels, including the secessionist Moro Islamic Liberation Front which had signed a peace agreement with the Aquino government.

The approval rating of Senate President Franklin Drilon was down from 51 percent to 44 percent, and his trust rating decreased from 47 percent to 42 percent.

Chief Justice Ma. Lourdes Sereno saw her approval and trust ratings virtually unchanged, from 29 percent to 25 percent and from 25 percent to 23 percent, respectively.

For Malacañang, the President’s approval and trust ratings of 46 and 45 percent can still be considered “high.”

“We note further the most significant increases in the President’s ratings came from socio-economic Classes ABC at both +7, indicating that the government’s programs to institutionalize good governance and transparency as well as ensuring continued economic reform and inclusive growth have resonated well among the leaders of the professional and business communities,” Coloma said.

The approval and trust by other sectors of the country remained “high,” he noted, which reflected the “positive sentiments and outlook of our Bosses, the Filipino people, who have witnessed and experienced the transformation of the country and its journey toward joining the ranks of high-income countries through sustained socio-economic progress.”

Belmonte said there was nothing out of the ordinary in the declines in trust and approval ratings registered by top officials, including the President and himself.

“I think ups and downs are just to be expected,” he said in a text message.

The Speaker said it would only be considered exceptional if there were “drastic changes” in the figures.

Asked to comment on whether the administration coalition had reason to worry, Belmonte replied pointedly: “Didn’t [Binay’s] numbers drop, too?”

The Binay camp shrugged off the unfavorable results of the latest Pulse Asia survey, declaring that the real survey is the warm reception the candidate for President receives on the campaign trail.

“We look at these surveys to see where the wind is blowing so to speak. But we say again and again, we are steady,” Rico Quicho, Binay’s spokesperson for political affairs, told reporters in Batangas province.

“In Vice President Binay’s rounds in different provinces, you see the warm welcome, the trust and love from the public. That’s the real survey,” he said.

“[The results of] the real survey will be known on May 9,” he added. Reports from Inquirer Research, Tarra Quismundo, DJ Yap and Nikko Dizon/TVJ