Tolentino bats for better building codes to save lives 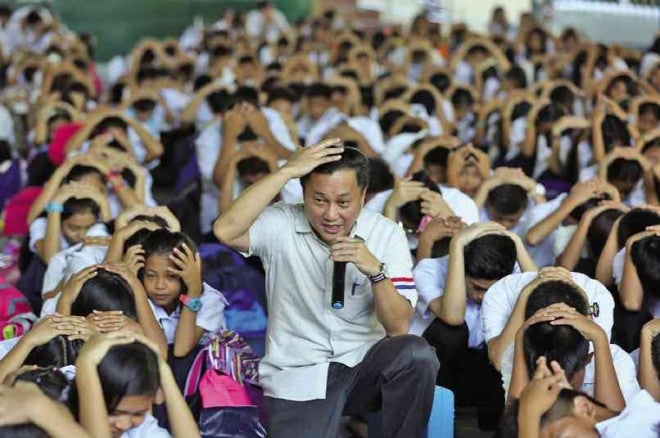 Even if it’s impossible to make a structure 100-percent earthquake proof, the enforcement of strict building codes can undoubtedly save many lives. Deaths and destruction could, indeed, be minimized through proper engineering and earthquake preparedness drills.

This is the message senatorial candidate and disaster preparedness advocate Francis Tolentino wants both the national and local governments to heed, especially in light of the deadly earthquake that toppled buildings in the Taiwan city of Tainan, killing and injuring scores of residents.

“Earthquakes pose a serious threat to our country. We share the same fault line as many of the other countries that have been recently affected by big quakes like Taiwan. With the latest series of earthquakes hitting our neighbors, it is extremely important to prepare ourselves in case the next big one strikes here,” Tolentino said. “I do not want to scare people but we all know a high magnitude earthquake hitting our country is a matter of when, not if.”

“Constant preparedness will certainly reduce casualties. The Department of Public Works and Highways has been conducting bridge and building inspections in Metro Manila. This must be continued and replicated by the local governments. We have to constantly ensure public safety with such preparations and we do this not in reaction to earthquakes but before earthquakes happen,” Tolentino said.

“While over 6 million participated in the first and largest ever earthquake drill dubbed shakedrill, it is not yet enough to instill the discipline of preparedness among our people. Earthquake drills must be conducted regularly in all the communities that will be affected by the impending tremor,’ Tolentino stressed.

Tolentino was the lead proponent of Operation Plan Metro YAKAL, the government’s comprehensive earthquake contingency plan that was formulated when he was still Metro Manila Development Authority chairman.

Before he stepped down, the Metro Manila Shake Drill he initiated had over 6 million participants and volunteers, and 2.1 billion social media views worldwide.

Tolentino added there must certainly be additional safety regulations designed to protect structures and occupants in the event of an earthquake given that the Philippines sits along the Pacific Ring of Fire and is vulnerable to frequent earthquakes.

Tolentino, former president of the League of Cities of the Philippines, urged local governments to do their part and have their own construction and building inspectors examine buildings and other structures in their areas.

“They should make sure constructions being done in their jurisdictions comply with building codes and ordinances for the health and safety of the general public. Many local governments have additional ordinances and codes that modify or add to the national regulations,” Tolentino said.

According to a study by Professor Benito Pacheco of the Institute of Civil Engineering of the University of the Philippines, more than 35 percent of low-rise residential buildings in Metro Manila and perhaps in other regions may not be complying with current government standards for construction.