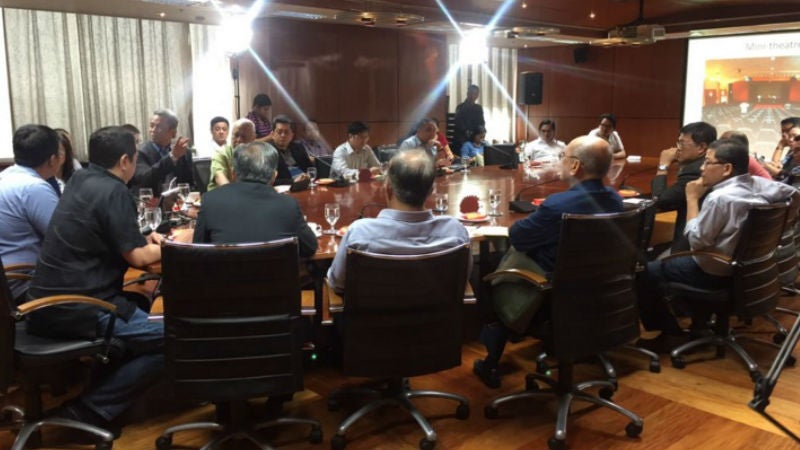 GMA Network and Inquirer brief representatives of presidential candidates on the mechanics of the first election debate to be held on February 21 in Cagayan de Oro. Photo by Kristine Angeli Sabillo/INQUIRER.net

How much time should the presidential candidates have for their opening statements? Will Sen. Miriam Defensor Santiago become the fifth candidate to confirm her participation? How many campaign supporters can accompany the candidates inside the venue of the debate?

All candidates have pledged to attend the debate, which will be held at Capitol University in the Northern Mindanao hub of Cagayan de Oro and aired live on GMA and streamed on www.inquirer.net.

In a friendly, joke-filled but sometimes pointed discussion, the campaign representatives themselves debated aspects of the first presidential debate. In one instance, when consensus was no longer possible, a vote was taken to determine the answer to the question about the length of the candidates’ opening statements. Three campaigns voted to stick with the original one-minute limit, while two others voted to lengthen the opening statement to either 90 seconds or two minutes.

Other matters resolved: Maglanque confirmed Santiago’s participation. GMA and Inquirer agreed to increase the number of campaign supporters inside the debate venue to 35 per candidate. Another meeting to fix security protocols was set. The alphabetical order of seating was retained for all four rounds of the debate, but the order of speaking for the third and fourth rounds was determined by lottery.

Questions that the moderators will ask are based on the following themes: development, peace and order, track record, constitution, and Mindanao issues.

Besides the candidates’ supporters, civil society and sectoral groups will be invited to watch inside the university’s main hall, which can seat 500 people. The rest of the supporters will be allotted seats in the nearby gymnasium, which can accommodate 2,000.

Leading to the debates, the Inquirer Group will hold a series of “town halls” to promote the event and generate questions for the debate.

Dubbed “Inquirer Town Hall: The Mindanao Agenda,” the series of discussions is co-organized by local networks such as LIHUK 2016 and the Personnel Management Association of the Philippines.

The first Town Hall is on Feb. 15 at the VIP Hotel in Cagayan de Oro, the second in Pagana restaurant in Cotabato City onFeb. 18, and the third in Cagayan de Oro again, at the Xavier Estates, on Feb 19. With a report from Kristine Angeli Sabillo/JN