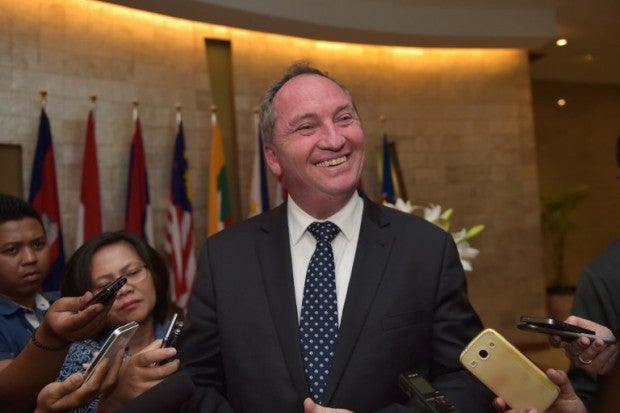 In this Oct. 8, 2015, photo, Australia’s Agriculture Minister Barnaby Joyce speaks to journalists after meeting with Indonesia’s Trade Minister Thomas Lembong (not pictured) in Jakarta. Joyce was elected unopposed as leader of the Nationals party at a meeting of party lawmakers on Thursday. AFP

CANBERRA—Australia has a new deputy prime minister, hours after his predecessor announced his retirement on Thursday, with the prime minister likely to announce a Cabinet reshuffle before elections due this year.

Joyce was regarded as a maverick early in his political career, often voting against the wishes of his party on legislation in Parliament. He is expected to agitate for more influence for his party in government than his predecessor, Warren Truss.

Truss, minister for regional development and infrastructure, told Parliament that he will retire at the next election.

Trade and Investment Minister Andrew Robb announced on Wednesday that he too will leave politics at the same time.

Turnbull made a major overhaul of the conservative government’s Cabinet in September after he replaced Prime Minister Tony Abbott.

He has yet to name a replacement for Minister for Cities and the Built Environment Jamie Briggs, who resigned in December over a drunken incident with a female public servant in a Hong Kong bar.

The future of another two ministers, Stuart Robert and Mal Brough, remain in doubt due to ongoing investigations.

Turnbull’s department is investigating if Robert, minister for veterans’ affairs, breached ministerial standards when he flew to China in 20014 to help a friend and Liberal Party donor secure a mining deal.

Brough stood aside as special minister of state and minister for defense materiel and science in December while police investigate allegations that he illegally accessed the diary of a former House of Representatives speaker.